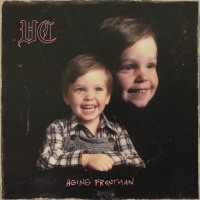 It’s not hard to tell what’s going on in Vinnie Caruana’s life. He does not dress up emotion, be it hate, love, fear or anything in between, in metaphors. One skim through any of the lyric booklets accompanying his various musical projects would confirm this. But he’s also admitted as much in interviews noting his small core of dedicated fans follow the ups and downs of his life. For his last few releases, Caurana’s explored love pretty thoroughly sinking up with a new marriage in his life. On his latest Aging Frontman, Caruana begins to explore what comes after contentment.

Aging Frontman is a six song solo album recorded with producer and fellow I Am The Avalanche band member Brett Romnes. This is notable for a few reasons. Caruana has always employed a host of friends and bandmates to fill out his releases - from Steve Choi of RX Bandits to Brandon Reilly from The Movielife and most recently Sammy Siegler in his new band Constant Elevation. This release feels uniquely Caruana adding new elements to his sound. The album is filled with soft and loud dynamics, atmospherics, vocal effects and hazy guitar tones. “Alone” may be the best example of this with a Lou Reed quality to it.

On opener “Better,” the dominant theme circling in these songs is introduced to the listener. Caruana emotes in his trademark howl, “When we leave our bodies / When the rolling blackouts become permanent / Have I made you better?” Death and legacy is explored thoroughly throughout the release, most notably on “Dying in the Living Room.” It compliments the sounds found throughout this record. By the time closing track “Tex “The Rock” Johnson” rolls in, the ukulele strums are a welcome reprieve as Caruana sings about cancelling today from a barstool with the hopes that his love remembers all his positive attributes, even when coated in a pessimistic sheen.

The juxtaposition of a picture of Caruana as kid for a release titled Aging Frontman is a fitting one. As he stares out over the beginning of his 40s, it’s clear what’s on his mind. Caruana will likely never be a huge rock star at this point, but if his music remains relatable and he leaves his friends and fans better off for knowing him than not, he’s found a legacy worth celebrating.

Real Sickies: Out of Space