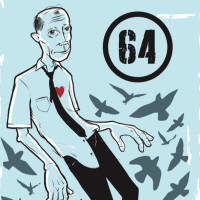 64 is a band of veteran musicians. Including members of Kill Your Idols and Mind Over Matter among others, the members are no strangers to punk and hardcore. However, what shines through most on this three-song 7” isn’t necessarily their veteran musicianship, but a band who wants to have fun with song-writing. The release is catchy as all get out, it’s fun, and it’s infectious.

The opening song, “I Wanna Float,” is a fast-paced punk song that draws on the catchiest parts of the genre. The guitars flow along with both grooving rhythms and catchy leads, and are anchored by drum beats that don’t overstep the simple but well-written riffs. The vocal patterns similarly keep it simple enough to flow on infectious lyrical melodies that circle around the music. The singing here is reminiscent of the anthematic punk tunes from early 90s skate videos, full of catchy harmonies and great choruses.

“Dead Ass Serious” follows as the 7”s second track , and opens with a minute long acoustic intro that is both impressive and appealing. There’s nothing hokey in this opening, as it showcases the singing ability of the vocalist and segues seamlessly into the song’s more punkified structure. The entire song plays like a chorus begging for crowd sing-alongs. The guitars have a bit of heavier crunch to them through the middle parts of track, but the closure comes back to aforementioned acoustic guitar just long enough to give the song a clever sense of structure.

The release ends with “This is Fucking Magic” which gets back to the structure found in the first song. The song is a frenetic punk track that employs popping drum tracks and speedy verse riffs, eventually cutting into a really fun breakdown at the song’s end. The crunch in the guitars has a sharp dynamic that allows for just enough heaviness without losing the song’s otherwise catchy tone. The vocal melodies are interesting here too in that they use some layers and harmonizing that add to the song’s depth.

This debut 3-song 7” from 64 is a great first release. I know I said that the veteran musicianship isn’t the most dominant aspect of the release, but it’s present. And that counts because the songs are just really well-written and recorded. That only adds to an already exciting set of songs. The tone here is one of fun punk rock to be sung along together. That should be a welcome vibe for any fan of the genre. The biggest criticism here is that the release is only three songs because it certainly leaves the listener wanting more. A very strong debut indeed.