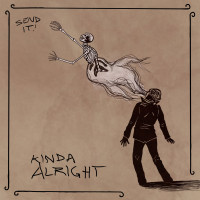 One can struggle with overly earnest or extra-dramatic emo rock that comes part and parcel with an American Football / Cap’n Jazz / Owen influence, largely due to an accumulation of genre over time. Putting it a less snooty way: if one accepts the premise that a person can only absorb so many confessed personal anxieties and insecurities before the cumulative weight feels more like performance - or, god forbid, whining - than actual catharsis, it's not hard to see the ceiling on replacement-level twinklepunk.

On send it!, Philadelphia’s kinda alright side-steps this issue entirely by framing their particular brand of emo through a tight, math-rock-by-way-of-post-hardcore lenses. What this means is that, for all the band’s finger-tapping and hyper-personal lyrics, the end result comes out sounding more like a group of gearhead musical theorists stretching their legs than it does the highlight of you next heartbroken mixtape.

There’s a muscularity to the compositions and performances on send it! that imbue it with an attractive confidence. It’s certainly a guitar-forward record, as the interplay between riffs and vocals do the bulk of the harmonizing on the EP’s five tracks. The unfortunately named “y’all noots cats” is probably the highlight, from a guitar perspective; from its chunky post-chorus drives (which reminds this reviewer a lot of Cloudkicker), to modern emo finger tapping, to it’s honest-to-goodness rock solo, this is a buffet for longhaired Guitar Center patrons.

The band bills itself as math rock, and the technical proficiency on display certainly puts the group in step with the genre. That said, the record’s other big highlight is the mostly four-four kissoff “bro u really are ass u don't know any combos or nothin,” which finds the band riding a never-ending drum roll into a primo slacker dig (“You do the bare amount / to safely say you did stuff today)” before finally galloping into the promised, inevitable odd time signature.

Where this leave kind alright, besides on the bleeding edge of Kinsella-inspired emo and beefy math rock, is as a band balancing its emo sensibilities with a desire to not be constrained by the traditional idea of what twinkle-emo is (peep the post-hardcore / metalcore closing track “zenaida”). send it! suggests that the two genres have a lot to say to, and to learn from, each other.

Somos: Prison On A Hill