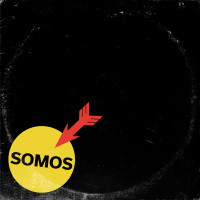 This was always going to be a tough record to review for me personally following the death of guitarist Phil Haggerty at just 28. Somos are a band I've loved for a long time and honestly, they're one of the touchstones of my adoration for the indie/emo/punk genre in modern times. While they've got a slew of EPs out and the divisive First Day Back, it's really Temple of Plenty that defined a sound I found few were making work at the time over five years ago. Tracks like "Dead Wrong" are what drove me to rush into a small crowd at Riot Fest in 2016 to see them and with Phil's passing, it was difficult to really process an album laid down before. Ultimately, what really works on this record -- their most sonically different to date -- is it embodies Phil's spirit as a social justice warrior, proving to be Somos' most political ever.

They've never shied away from politics, and Phil's always fought against toxic masculinity and white supremacy among other things. They're Antifa, for sure, but their old music has also touched on capitalism, exploitation of the poor, slave labour in America and the grind of the one percent against the downtrodden. Make no mistake, Ronald Reagan's peeps would easily tell you from the album title Prison On A Hill that this record was never going to pull punches. And lyrically, it doesn't. Vocalist Michael Fiorentino is back and not skipping a beat after the band's hiatus and his own battle with mental health. His words cut deep, even if they're a bit too over-produced and autotuned, which is one of the few gripes I have with the album's overall production. Still, this is what garners you an opening spot for Foo Fighters -- Somos pack the record with stadium singalongs and shimmery homages to the '80s fit for commercials, Netflix romantic dramas and anyone who wants to hear how catchy dream-pop/rock could be.

"The Granite Face" is a great example of this, opening the album awash with a synth feel that throws a nod or two to Stranger Things. "Farewell to Exile" follows in the similar vein right after and by the time you're midway, you can tell this is a plea for America to take care of its youth. Somos sees everything they're up against, backs against the wall when it comes to racists, anti-refugee policies, sexual discrimination, gender discrimination, the whole nine (aka the fucking Trump philosophy) and these songs are acting as missives for the youth of tomorrow to keep fighting. So in essence, it's a coming-of-age album but way different from the trials and tribulations of old. These feel more PSA than personal, as seen with the slow burn of "Mediterranean" which dives into immigrants and how they're being shit on by the current US administration. And at first while I wondered why Somos didn't go aggressive with these bombs, it's clear they want the message to slowly sink in and they think a calm, lush soundscape (something Beach House fans would love) makes the most sense to translate their thoughts.

Of course, you do get a bit of their Hopeless Records style via "Ammunition" but it's nice to see some of their Tiny Engines vibe come back out on "New Blood" and "Dreamless" with a bit more rock and roll pep in their step. But ultimately, Somos go political with a dance-rock album of all things, reminding me of Balance and Composure's last album. "My Way To You" sums this up perfectly with its sway essence, feeling like the band listened to twentyOne pilots along the way, and again, the message stands out in times when Somos recognises there's more dark than light. "Young Believers" and "Temporary Hope" best exemplify how Somos mix and mash up sounds here, along the lines of acts like The Naked and Famous ("Young Blood") and remind us all that we need to stand up with and for the youth as well. It's a long journey but we'll get there eventually, overcoming that hill placed in front, so long as we stand on the frontlines together and break the prison walls down. It's about burning the system to the ground and it's exactly what Phil would want fans to take away.