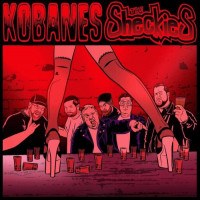 Unless you have been living under a rock you have certainly noticed the resurgence in popularity of classic pop-punk and Ramonescore. Across the globe, bands keep forming to play homage to their heroes from the glory days of the 90s. Luckily for us fans of the genre, many staple bands have never gone away. The Kobanes from Chicago and The Sheckies from New Jersey were both formed a little over 10 years ago. Each perform three original tracks showcasing their own take on the classic pop punk sound.

The Kobanes kick off side A with an instrumental rocker titled “Road Rage.” This solid EP opener has a similar chord structure to “Pump It Up” which was penned many years earlier of course by the legendary Elvis Costello. “Nostalgia Is Dead” follows and represents the standout track on this side of the platter. On this track Marky Kobane preaches his displeasure of the current trends in both music and beyond. This subject matter is not new for the Kobanes. This track is a steady rocker and contains well placed keyboards throughout. A Kobanes release would not be complete without a tongue-in-cheek track. This comes in the form of “Monkey Man” which details the life of living in a jungle. The Kobanes downstroke their way through this mostly repetitive track to close out their side of the split

The Sheckies wear their influences on their sleeve on side B. “Too Fat For My Leather Jacket” is a true nod to the 90s classic pop punk formula. All the usual elements are present, from tasty guitar leads to catchy runs and back up vocals. On “Me and You, Miyu,” the Sheckies showcase their Ramonescore side right from the opening chords. The track progresses through with a tempo reminiscent of the golden era of Rock N Roll in America, the 50s. The Sheckies rock a nice ballad with “That’s Not Her” to close out their side of the split. This track incorporates the softer side of the Ramones and Queers.

If you have been missing the glory days of labels like Lookout, Clearview, and Mutant Pop, then this split might be what you seek. Current fans of the bands should proceed without caution. This release could restore anyone’s faith in pop punk. One final note for the collector nerds. Act fast, as this was released in limited quantities on four different colors.