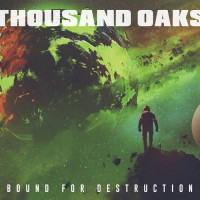 There’s been this revival of the original EpiFat sound in 2019, and its comeback has been carried by many of the bands that helped to create and crystalize it. New releases from most of the founding fathers of the genre reignited a spark in many of us aging punks that’s just been simmering inside of ourselves as life just did its thing. Personally speaking, this resurgence has prompted the revisiting of back catalogs, but also the hunt for new bands out there, (or bands I’ve yet to discover,) that are pumping out high octane, melodic skate-punk.

A few months back, I really got into Spain’s Adrenalized and from there, went down a wormhole of European bands mirroring this similar style. One of them was Thousand Oaks, who, like many of their brethren across the pond, are keeping the flame alive and pumping out records full of intensity and contained chaos. It’s like they all received an undergrad degree in Ruiner, and then a Masters in Potemkin City Limits.

Hailing from Rome, Thousand Oaks has risen from the ashes of Jet Market, a band with a robust discography that saw some moderate success in the 2000’s across Europe and Japan. Bound for Destruction is their second full length and follow-up to their 2018 split LP with Too Close to See from Japan. This latest release exudes this “surviving the war inside of yourself” theme throughout, and the result is a battle-ready soundtrack supporting the fight. Opener “The Road of the Consequence” leads the charge, directed from the back by drummer and lead vocalist Alex Gavazzi. The track is guided by spaceship-y chords, launching into a skip-along tempo that subtly dials up as it builds. Gavazzi’s vocals here are the driver, much crisper and cleaner than previous releases, yet still possess a bit of gruff when needed. The harmonies paired with the charging changes throughout are further exemplified as the record moves along, particularly on “Missteps in Evolution” and “Gone Astray.” In a record full of weight, these are two of the heaviest and fastest tracks, but both are highlighted by smooth vocal delivery supporting the musical discord that’s manufactured.

“Soaked in Desolation” is the most Wilhelmsy of the ten tracks on Bound for Destruction, and packs in speed, screams and harmonies in a mere 0:36. Right from the start, (though it seemed to end just as it began,) it was the track that stuck it’s neck out and would’ve made for something even more fierce if they were to expand and stretch it out. On “Adamant” and “True Blue” they seem to approach a yellow light, but both make for change-of-pace complements to the accelerators that power Bound for Destruction.

Thousand Oaks are one of the standouts from the school of Chris Hannah. They’ve set themselves apart by balancing controlled harmonies with sharp and hefty transitions, and Bound for Destruction is their most even-keeled release to date.