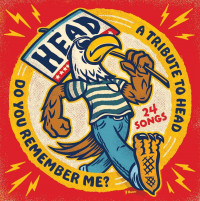 Tribute albums in general are a polarizing commodity amongst collectors and the casual listener alike. Either you like them, or you don’t. Period. Sometimes, the tribute is nothing more than a collection of songs by a band who has already been covered to death. Other times, the tribute is performed by bands completely outside of the genre. What we have here though is a tribute to a relatively lesser known band performed by many who they have certainly influenced musically. For those unaware, HEAD are a heavily Ramones influenced band hailing from the Pacific Northwest who began their recorded output back in 1992. The rareness of their records combined with their limited live performance has always made HEAD somewhat of a mystery. This tribute’s roster of 24 bands reads like a “who’s who” of today’s international pop-punk scene. If this floats your boat, then please read on.

This global pop-punk party starts with a great 1-2-3 punch. Japan’s So-Cho Pistons kick things off with “Theme of Head” which transitions well straight into “No Hugging, No Learning.” Their knack for amazing backing vocals makes for a great opener. Italy’s Manges follow up with “Senor Itchy” to much success. They truly make this their own and Andreas excels the Spanish vocal lines. Longtime American pop-punk staple the Parasites take on “Spend the Night Alone.” Soaring guitar leads and a strong bass line perfectly complement Dave Parasite’s signature vocals. The younger side of American pop-punk is well represented throughout. The Putz from the Midwest rock hard with “Don’t Go Looking in the Closet.” Awesome vocals are present on “No One Likes a Snitch” from The Suck. Recent Mom’s Basement signing Flamingo Nosebleed churns out an honest cover with “Am I Fresh?” Former Queers and Guts member turned solo artist Geoffrey Palmer performs the lo-fi rocker “Always Know Your Enemies” to great results. The Young Rochelles blaze hard through their take on “Teachers Pet” in their own unique style. Long running east coasters, the Prozacs chug through “Taking a Peek” which features J Prozac’s signature snarl.

European pop-punk is well represented. TOUGH rocks hard on “I’ve Made My Peace With The Hippies.” Fellow Italian countrymen MEGA and Volkov take a less aggressive approach with “They Used to Call Them Bums” and “Pull the Plug.” Some more rocking Italian pop-punk comes from both the Proton Packs who take on “Gladys Kravitz” and the Ratbones with “Do You Remember Me”? Austria is represented here with two solid garage rockers. First, DeeCracks pummels with “Killed By Death” like a freight train in the night. The Mugwumps pay tribute with “Calvin and Susie” Finally of note would be the sole all-girl outfit on this release from Canada, the Lorrainas. They produce a solid garage rocker with their take on the classic “Stag Party.”

I went into this listen having only heard a handful of tracks by HEAD. I wanted to hear for myself how today’s well-known pop-punk bands would handle these tracks. The majority made the songs their own while some paid honest straight forward tributes to great results. Highly recommended for anyone interested in this band, current HEAD fans, and / or anyone looking to hear today’s current global pop-punk leaders. I am left wanting more HEAD!