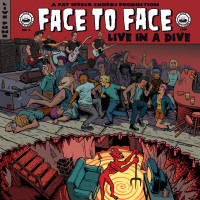 When a band with a three-decades long catalog (like, say, face to face) puts out a late-career live album, (like, say, the latest edition of Fat Wreck’s long-running Live in a Dive series), there’s going to be a morbid curiosity in figuring out which albums the band stands behind and which ones it may be less enthused about at the moment. In that light, it seems the band is big on its latest (2016’s Protection gets a fourth of the overall run), maybe a little ambivalent on its ancient past (one song each from its first two records), and also thinks Reactionary got a raw deal at the time of release (it makes up another quarter of the record!).

Taken from a three night stand at Brooklyn’s metal-forward St. Vitus bar (lead singer Trever Keith’s “we are all worshiping and glorifying Satan together tonight” is one of the better bits of banter on the record), face to face’s edition of Live in a Dive does a good job of proving the concept of “face to face in the 2010s.” “Double Crossed” and “I Won’t Say I’m Sorry” come across especially well, both in the choice of sequencing and in their performance; the former comes on the heels of perpetual shout-along “Bill of Goods,” the latter comes sandwiched between a 1.0 highlight “No Authority” and Reactionary standout “You Could’ve Had Everything.” Place on the album aside, the more important thing is that these tracks sound lock-step with the band’s classic, more established catalog, and are preformed with the same level of comfort and skill as the rest of the record.

A quick note on song selection: It’s extremely likely your personal favorite face to face song is not represented here. The band has six albums, and only 13 tracks make the cut here. If you’re the sort who prefers personalized playlists to albums, this may be a hard sell. One man’s opinion: I’d rather a band be sprinkling modern stuff in with familiar oldies than hear another version of “A-OK.” Your mileage may vary.

At bare minimum, a live record should capture the mood and spirit of a band performance. The better ones will make the listener wish they were in the room. The absolute best ones will recontextualize a band and change something about how their music is presented. At all times, Live in a Dive clears that first hurtle with ease, and it gets above the second more often than not. The mid-album of “No Authority”, “I Won’t Say I’m Sorry” and “You Could’ve Had Everything” comes off especially well. There’s a confident, urgent quality to this three-song suite that may make you feel like you missed something not being there.

Everywhere else, the record captures face to face sounding happy to be there, locked into their performances, maybe a touch uneasy with how their audience seems to be aging with them. Live in a Dive makes a compelling argument to revisit the band if they’re coming to town, both for their new stuff and to get in on the “Disconnected” sing along.

V/A: Do You Remember Me? - A Tribute To HEAD

Sicko: In the Alternate Timeline