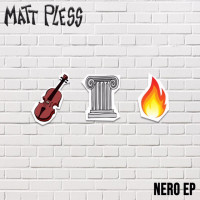 Nero marks the first release of the legendary DIY anti-folk singer Matt Pless. His first non-self released album was picked up by Vinnie Fiorello of Less than Jake on Paper Plastik record, which also marks the first time a traditionally DIY Folk Punk artist has broken into the “mainstream” independent punk world. Sure, AJJ, Against Me!, and a few others have seen releases on labels similar to Vinnies, but Matt comes from a scene known for constant touring, generally in houses, basements, and other DIY spaces, and his scene has definitely set itself a part from the likes of AJJ, Mischief Brew, Ramshackle Glory, and definitely Against Me!

Matt embodies what this growing scene has been pushing for many years: work hard, put out good music on your own, tour constantly, and the kids will follow. Bands like Days N Daze, Apes of the State, We the Heathens, and the Railyard Ghosts, among many others, and especially alongside Matt, have spearheaded this direct approach at making music, and doing so on your own, so it was a bit shocking that Matt decided to do a release with a decent sized independent label. That said, who can blame him for trying to get his music out to even more listeners, especially since, and its obvious once listening, the switch to a label didn’t affect his sound/lyrics/ethics or anything else.

Nero is a bit of a compilation, containing three old school tunes that Matt has previously self released, and three new songs. It starts with the title track (his best writing since Catch me if you Can), a country influenced tune that immediately has your toes tapping, as some of the most intelligent lyrics ever written flow through the melody, and force the listener to question their outlook on the world as a whole, a common theme amongst Matt’s songs. He questions the world at large, people’s choices in their attempts to change the world, and as the chorus suggests, decides that he’ll just play his tunes while the world, and its peoples choices, force the world, or in this case, “(Rome) burn down”. As is common in all of his music, he presents valid problems, and presents potential solutions, from both sides, allowing the listener to make their own choices, rather than force feeding them his idea of perfection.

The second track is one his classics “When the Frayed Wind Blows”, rerecorded, and this version seems to have just a bit more “Umphh” it. I can’t decipher exactly what is different, but it sure feels more angry than its previous recording. Following this more aggressive version, is another classic, “The Crayon Song”, which for those unfamiliar tells the story of a mentally ill woman, possibly also a drug user, and is the perfect ballad to follow the first two tracks. This rerecording feels “fuller” than previous recordings, containing additional strings, and really takes this classic song up about ten notches, making it one of my favorite tracks on the EP.

The second half of the EP continues in typical Matt fashion, and while none of the last three songs blew me away like the first three, they were all amazing in their own right, but following this one, two, three punch, I’m not sure anything that could have followed would have been enough for me to gush over, though I will say the 5th track “When the Horses Go” has a beautiful melody (coupled with genius lyrics as usual) that if released as a single could easily be a stand alone hit, so definitely don’t stop after track three.

The EP as a whole, despite being half rereleased material, really flows well, and was a welcome addition to my collection. Matt continues to amaze me with every release, year after year, and I cannot wait to hear his newest album, which he has self described as the “one”. It's going to be hard to top all of his previous releases, but if he says he’s done it, then I need to hear it.

Matt Pless will be one of the headlining acts at Folk Shit Up in March 2020, an event sponsored by Punknews, so if you have the opportunity, make your way to Dripping Springs, Texas for a stacked line-up.