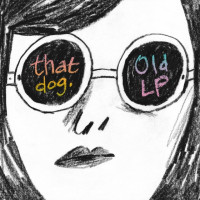 It’s hard to believe that That Dog.’s finest work and presumed swan song Retreat from the Sun was 22 years ago. Doubly so since their newest album Old LP feels like it was a lost relic from that era (even down to the title and artwork.) While the complete lack of aging may be slightly uncanny, this is yet another solid collection of fuzzy guitar pop from a perpetually underrated band.

Musically, the album continues the band’s iconic tug-of-war between sugary art pop and head nodding slacker rock. Take how the slow, deliberate strings of “Drip Drops” immediately smash into the buzzing pop-punk guitars of “If You Just Didn’t Do It”. This kind of dichotomy is what’s always made That Dog. stand out among their peers. The energy is still there, but it’s enhanced with multi-part harmonies and flourishes of strings, synths and horns to make them feel grand.

Part of me really wishes this album had come out during the summer, because it really would have been the perfect soundtrack. The jangly guitar lick on “When We Were Young” (especially in combination with the vocal layering in the chorus) immediately transports me to the beach, alcoholic Arnold Palmer in hand. “Never Want to See Your Face Again” and “Least I Could Do” give me heavy Replacements vibes. They’d be perfect to watch the sunset from your rooftop to, wallowing in a bit of summertime sadness.

Old LP is mostly on the mid-tempo side, but there are some barn-burners to spice things up. In addition to the aforementioned “If You Just Didn’t Do It”, we have “Down Without A Fight”. Possibly the rowdiest song the band has ever released, the pounding drums and noisy production echo Pinkerton (an album That Dog. fans probably know featured bassist-vocalist Rachel Haden in its original, cosmic-thrill-seeking draft).

While this comeback album stays remarkably true to the sound of That Dog.’s glory days, there are a couple noticeable deviations. Unfortunately, I think these moments, which respectively open and close the album, are its lowest. “Your Machine’s” twee vocal fumbling is messy in a bad way, and the closing track’s drum pattern sounds more like a high school marching band than a rock act.

Overall, it’s just nice to have That Dog. back making music, especially on the level of what they were doing in their prime. While not perfect, and definitely more than a little safe, Old LP is a sincere set of guitar-pop songs that can appeal to your little brother in an Angel Du$t longsleeve or your older sister with three Fiona Apple tattoos in almost equal measure.

Knocked Loose: A Different Shade of Blue
Go to the review index