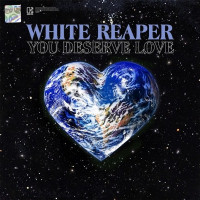 “If you hate the new record, then you hate us,” White Reaper keyboardist Ryan Hater told Stereogum earlier this year. And it’s easy to hear why they were trying to get ahead of themselves. After the admiration for their last album The World’s Best American Band, White Reaper signed to the recently revamped Elektra Records (from Polyvinyl) and hooked up with Jay Joyce, who’s worked with both FIDLAR and Eric Church. Still, the result is another pretty straightforward, if slightly more accessible, record, You Deserve Love.

There are dual guitars but they're not too hair metal. There are tons of keys but they're not too 80’s either. Tony Esposito’s voice is sugary and so are his hooks, but they never sound too cheesy. No, White Reaper, giant rock sounding name included, are exactly what they aim to be. Lead single “Might Be Right” arrived this past May and still sounds like it’s awaiting larger stages. The same goes for other pre-released singles, the poppier “Real Long Time” and classic love story “1F.” Thin Lizzy is a constant reference for good reason because White Reaper are a rock band wanting to be a huge rock band. There’s an earnest to them that bleeds through in their songs (even if it’s hard to read in their previous tongue-in-cheek album titles The World’s Best American Band and their debut White Reaper Does It Again.) You Deserve Love makes their MO clearer. Lyrics like, “Still screaming at the raindrops, hard luck, chances all blew away, You gotta realize I'm only here for you,” is totally sappy but resonates universally. Esposito tiptoes this line constantly but at the end of the day, it feels natural.

Each member of White Reaper gets a little spotlight. Drummer Nick Wilkerson keeps the speed up on “Raw,” while his brother Sam gets solid bass lines on “Real Long Time” and the title track. The dual guitars of Esposito and Hunter Thompson are constantly melodic and often intertwined, especially on “Make It Right” and late album track “Ring.” But while the guitars are expected, Hater’s keys are a treat, constantly adding flair without overpowering any of the songs.

You Deserve Love from its title onward is a sweetly sincere effort made for the masses, which nowadays means it’s not for everyone. But hopefully You Deserve Love continues White Reaper’s constant rise toward the arenas. It sounds like it should.

Guided By Voices: Sweating the Plague

The Darbs: The Darbs