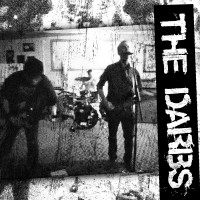 The Darbs took a novel approach when reaching out to see if I’d be interested in reviewing their record. The Sheboygan, WI based band hit me where I live! They described themselves as “a trio of balding, chubby, wrinkly, greying, friendly, and relatively humorous 40-something dudes who love playing music.” As the baldest, chubbiest, wrinkliest, greyest, friendliest and funniest (according to my mom) 40-something, music loving dude at Punknews, how could I resist? Little did The Darbs know, I also did most of my growing up in Wisconsin and have a soft spot for bands from the Dairy State. Call it a successful direct marketing campaign.

When a band makes a record for the right reasons, it usually shows. That definitely seems to be the case with The Darbs. After a certain point, there’s no more pressure to “make it”, and the bands that survive do what they want. They make music for its own sake, and for themselves. That’s how this feels. The Darbs debut LP is a self titled, 17 song effort. The song topics seem to alternate between dealing with modern life issues and fond reminiscing. Musically, it’s similar to ‘90s style punk. I’m thinking a slightly more stripped down version of stuff like Screeching Weasel and Sicko, but not quite as poppy and more sincere. (There might also be a couple of subtle musical, but not lyrical, nods to the Misfits.)

This set of songs will grow on you. About the third time around, the choruses will get stuck in your head. Side one opener, “Gonna Go Back”, is among the catchiest songs on the record, and really sets the tone and pace. Other first half highlights include the cheeky “Arrested”, the relatable “Sitting Around”, and the catchy “Blue Line Train”. “Give it to the Man” is definitely the most punk song on the record, even if it is slightly mellowed by age and experience. All the songs have a solid, meat and potatoes quality. The production is the straight ahead style that I prefer. It has a live sound, and there appears to be minimal studio trickery.

Side two opens with another pair of catchy songs in “Calling on the Night” and “Time Out of Mind”. The next two, “We Will” and “We Go Higher” are really good too. It ‘s probably the strongest chunk of the record. I actually found myself preferring the second half, which doesn’t seem to happen very often. “Reeling” is probably the fastest song on The Darbs, and “For the Night” is a strong closer too. Although the songs have traces of melancholy, they’re mostly upbeat. These three cheeseheads are enjoying themselves, and as their geriatric peer, I am too. What’s more important than that?

When 2019 reaches its merciful end, I’ll be very surprised if The Darbs isn’t my second favorite record from Wisconsin. (Boris the Sprinkler probably has the top spot locked up.) In some ways, playing music in your 40s is like sex in your 40s. It might not have the spine tingling, toe curling highs, but it also doesn’t have the regretful, embarrassing lows. Plus, you know you’re lucky to still be doing it at all! Go ahead, take a roll in the hay with The Darbs.