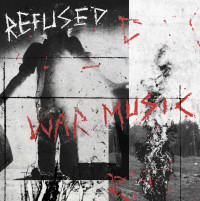 So we can all agree we'll never get The Shape Of Punk To Come again, right?

Now that that's out the way, I'll be the first to say I thought Freedom didn't get the credit it deserved. A lot of the criticism I found was a bit harsh, and honestly tapered to what Refused did in the '90s before they broke up. But what I do love about them and what they're kicking around seven years in since they reunited is the band didn't reverse and try to mimic the winning formula of old -- they simply drew the strong points of the last record and meshed what worked in the past, scrubbing the bad and producing what I think is one of the most poignant albums of the year in War Music.

In a time where there's no Rage Against the Machine making political rock music and personally, there's not that many artists in general leaning and attacking the profiteering and manipulation both sides, Refused do just that, reminding us why we fell in love with them in the first place. Songs like "Turn The Cross" with its heavy metal riffs and the classic rock feel of "Blood Red" are a great evolution of the hardcore-punk style music they make, with post-punk bangers like "Violent Reaction" owning the aggression of what made Shape so successful. And make no mistake, you can sense the music spine of that eponymous album sprinkled all over this new record.

But what I love is how Refused embrace their unconventional side too, whether it's a little AC/DC here and there, some Killswitch Engage (refer to "Economy of Death") or the catchier, mid-tempo drawl and slow burn of AFI. Seriously, on the latter, you can just look to songs like "Malfire" and "I Wanna Watch The World Burn" and you can tell these are songs that could come straight from the minds of Davey Havok and Jade Puget. I would admit sometimes they kill momentum of the album and one or two tracks do blend in and feel repetitive but the lyrics, messages and overall political edge compensate for these shortcomings.

Dennis Lyxzén once more owns it on the mic and even when he feels overproduced the musicianship -- sickeningly mad riffs and lightning-fast kit work -- make up to once more prove how technically adept Refused are. It's about wars, bloodshed and the state of the world from Asia to Africa to Europe and the Americas. And as the title implies, this album is a rallying call and overall shout-to-arms for us to stand together against oppression. Like I said, even if the music doesn't hit, the message will.

The Darbs: The Darbs

City and Colour: A Pill for Loneliness