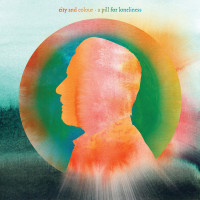 The best confessional songwriting, which we will generally describe here as songs written about personal experiences for a mass audience, finds a balance between specificity and generality. By his own admission, Dallas Green – a once-and-future member of post-hardcore emo champs Alexisonfire – uses his solo project, City and Colour, as a vehicle to tell his personal stories to a broad audience. In an interview with Rolling Stone earlier this year he says that the project is an “outlet to write very personal stuff, about things in my own life and try to make them as relatable as possible so that people can hear them and try to take something from that.”

That quest for finding the universal truth in the personal may have flattened the message a bit. It’s true that there’s a fair amount of navel-gazing and lesson-learning going on in the lyrics on A Pill for Loneliness. It’s also true that the lyrics bear very little to personally tie the author his life experiences. I don’t doubt that, when Green sings in his album-constant high registered vocals that he is “sorry that I wasn’t better / at being who you wanted me to be,” he connects it back to a specific memory or series of memories. For the context-free end-user, it plays like a yearbook quote. There’s evidence in the text to suggest Green’s aware of this. The chorus of album highlight “Song of Unrest” goes: “How can I explain / So that you will understand / how foolish it must be / to opine so openly.”

What this adds up to is a lovely record of rock-obsessed bedroom pop that wants to be open, but at times comes off hesitant to open up. Musically, it walks an impressive line, sounding maximalist and expensive and blurring the lines between something more straightforwardly aggressive and something you might find on an adult contemporary radio station. These ideals come to a head on “Imagination.” It’s the album’s most defiant and urgent song. It sounds a little bit like an introductory course in The Flaming Lips, which its approachable technicolor psychedelia and its driving guitars. “My imagination will / lead me straight down into hell” goes the chorus, before softening that self-sabotage with determination. In this lane, the album comes to life. Elsewhere, on the album-opener “Living in Lighting” and later on “Me and the Moonlight,” it seems content just to be pretty.

If Instagram posts are to be believed, the album’s title comes from Green seeing an ad for an anti-loneliness pill advertised on television and realizing that the true loneliness cure, at least for him, is music. That effort to appeal to a big tent is apparent on A Pill for Loneliness, but its missing the personal touch.

The Casualties: Until Death: Studio Sessions