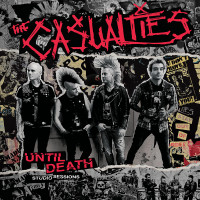 The Casualties have always been one of the most divisive bands in punk. While many appreciate their adherence to old school aesthetics and sound, many others are quick to admonish them as living caricatures of what was actually a very brief chapter in the history of punk, and for their willingness to actually declare “we are punks” in their lyrics. Oh, faux pas.
Personally, while I wouldn’t put the Casualties on (almost) any sized list of my favorite bands, I do believe they get a bum flap…err, bum rap. If we’re talking about the clothes, fashions from every culture and subculture evolve and change over time, but there are always those who will freeze one moment in time and stick with it. And so what? You do know greasers are still a thing, right? As for the music, it’s pretty hard to sit there declaring that punk should be about passion before anything else, and then knock this band who, for better or worse, has been running on pure passion for almost 30 years.
But, as often before, I digress.
Today we’re talking about Until Death: Studio Sessions, the newest release from the Casualties. This is not a new studio album in the traditional sense; rather, a collection of new studio performances of songs from throughout the Casualties catalogue.
As I A-B’d between Until Death and the corresponding original songs (yes I had them all, haters), I mostly found an odd sense of sameness, with few exceptions. The most obvious difference is David Rodriguez, who replaced original vocalist Jorge Herrera in 2017. When a band needs to replace a longtime lead singer, especially one like Herrera who started the band and was a signature part of their sound for 27 years, they certainly don’t want someone whose vocal style is too far removed from that original singer. That’s just simple logic. After all it would be pretty absurd to put a Mike McColgan or a Brendan Kelly in this slot. But at the same time, they probably don’t want a tribute band champion either; and that may be what they got in Rodriguez. Rodriguez sounds just enough like Herrera, albeit a bit younger, and without his heavy Hispanic accent, to make the listener do a double take on most of these songs.
This similarity isn’t a complete failure. Rodriguez is a perfectly capable vocalist, and his style certainly suits the band well. The band released Written In Blood last year with Rodriguez at the helm, and, judging from this collection seeing daylight, is likely planning more original material in the near future. But for the purposes of this collection, the different singer can be just a bit of a knee jerk to longtime listeners.
But that’s where the differences end. Other than some slightly higher quality recordings, and a handful of very small production tweaks like giving a line of a chorus to the backing vocals instead of the lead, these songs remain virtually identical. It seems to me that this was a project that the band could have really had some fun with, but didn’t. Maybe drop or add an intro, change up the tempo, lengthen a solo, update a lyric. Everything remains exactly as it was.
And that could very well also be the point. Remember the band that’s been running on passion for 30 years? Who’s to say that they don’t still love these songs just the way they’ve always been, and the only thing that needed to change was to get their new singer on tape singing them? Nobody can deny that the Casualties have always done what they wanted to do, without taking harsh judgements into consideration. And they’re certainly not going to stop now.

City and Colour: A Pill for Loneliness