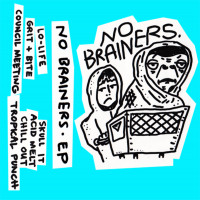 To say that No Brainers play fast would be an understatement. Their seven song EP is about five minutes long. It passes by in a blur of energy that makes you want to run in circles. Listen to this where you have some leg room or can move. Every person in this band has to be on the same wavelength in order to get the music out that precise that quickly. The guitar is able to transition smoothly from heavy, strong hardcore riffs to intricate solo patterns that feel a bit lighter in a matter of seconds. “Low Life” features this amazing ability for the first time but not the last on No Brainers. This adds dimension to the songs and personalizes their songs, creating a style unique to them and setting them apart from typical expected hardcore arrangements. The bass has a good tone and stays in the back for the majority of the EP. The drums are strong and keep the band on track throughout the non-stop high-speed ride of No Brainers. “Council Meeting” and “Skull It” both showcase the drummer’s talents as they are able to throw in some variations to pull you in. The vocals are punchy and clean with a mild rasp when they get louder and hold notes.

The lyrics vary in topic from having to push through a rough experience while remaining composed on “Grit & Bite” to warning of an imminent alien invasion on “Acid Melt”. The eclectic mix of topics makes for a fun ride as you never know what is going to happen next. The chant of “BEER! CHIPS! TROPICAL PUNCH” on “Tropical Punch” is catchy and makes you want to sing along. These are the only things you need to survive and thrive while building the world back up after it has fallen apart assure No Brainers.

No Brainers self-titled EP is a wonderful mix of unique hardcore. The album is well produced with the instrumentation sounding crisp and clear while still retaining some of the fuzzy garage undertones. However, I found that some of the lyrics were hard to make out and was glad that the band provided the lyrics. The songs sounded similar but were unique in their arrangements and lyrics to set them apart from each other, ensuring that they didn’t blur into one with the speed. No Brainers will infect you with their tireless energy.