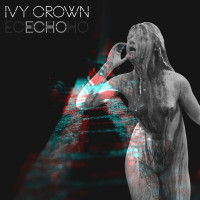 A new band for your ears, folks. A new band but made partially of elements that may seem familiar; and with good reason. Ivy Crown and their debut record Echo are coming to you straight from the frosty but infinitely cool streets of Copenhagen and partially from the ashes of Taras, a Danish punk band of some note since they hit the scene in 2012.

But let’s clear this up quickly; this isn’t a Scandi-punk record. Beyond the innate sass in Maria Kjaer’s vocals, you’d probably be hard-pushed to find much in the way of overt Scandinavian influence in the band’s sound. What the band trade in is an uncommon mix of melodic metalcore and classic rock. Specifically, the split is basically between the vocals (falling in the classic/hard rock territory) and the actual music feeling very much like one of the more mainstream-compatible mid-00’s metalcore bands along the lines of a less intense Killswitch Engage or 36 Crazyfists. There are frequent changes of pace and the syncopation of the guitar lines are enough to hold me interest, but it rarely steps outside of its comfort zone.

Unusually though, the band’s sound means that their comfort zone includes some areas that maybe other bands in the genre might struggle to reach. There are moments throughout the record where modern production techniques are very noticeable and occasionally they’ll bring synths into the fold, for example. Whereas that can be jarring with some heavier bands who try to integrate those sorts of contemporary polish, with Ivy Crown’s somewhat cleaner sound it actually works well. In this regard, I could see them being a potent gateway band for some people. Also, with Ivy Crown being an all-female band, they have the ability (when they choose to use it), to infuse the songs with a sense of femininity which really isn’t a mainstay of many metal sub-genres and isn’t something that many metal bands are equipped to invoke.

In the interest of balance though, I think it’s only fair to point out that we’re still dealing with what a lot of people will deem to be a heavy record here. There are breakdowns which make you involuntarily screw your face up and you’ll feel your neck going before you know it. On top of that, from time to time, you are jolted by a scream vocal (provided often, but not exclusively by guest vocalists) and to be frank, when set against some of the nastier breakdowns on the record, there’s power on display that is often hard to convey with the modern production style that the band have opted for (see the breakdown around 2:40 into “That’s What You Do”. Oof).

I have to concede that my personal preference for rougher, more jagged and nihilistic-sounding metalcore meant I had to give this a few listens through before I really got it, but when you realise you’ve got a superb vocalist with a real knack for hooks, emotive but accessible lyrics and themes, moments of inescapable and satisfying heaviness, then I’m willing to bet a lot of people will find a lot to like here. The production is radio-ready with thick-textured guitars, tight rhythm section and vocals that few people could fault (objectively, at least). This might not be my typical fare, even within the genre, but it is undeniably good. Imagine Killswitch, While She Sleeps, Paramore and Halestorm had a baby. And the baby was inexplicably a really good singer but also angry. There you go.

MakeWar: Get It Together