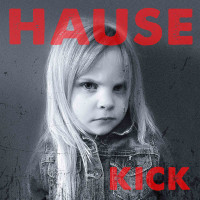 I admit, I slept on this album, not because I don't like Dave Hause, but because in a year filled with death and anxiety, I knew it'd be a tough one to get through. Reviewing's kinda like that. And listening to music in general, as some albums are so emotionally heavy, they can sap you dry when you least expect. A couple months after its release, though, I can safely say Kick is just that -- a kick in the gut, a kick in the ass and a kick out the door to get out there and start living life.

It's ironic, I warmed up to this by going on a Brian Fallon binge over the last few months, and with his buddy Dave easing his way in, it's amazing the parallels that can be drawn between both of them. But without taking away from Dave's story, let me just say as someone who adores all his music so far, this album is testament as to why I often tell people he's a modern Bob Dylan. Tall order, I know, but his lyrical mastery and soothing vocals really do bring it home for me. From the first track "Eye Aye I" it feels like you're getting reacquainted with Bruce Springsteen which quickly barrels into something magical for fans of The Who, Gaslight Anthem and Tom Petty in the more upbeat "The Ditch". But changing gear for Dave is something that comes naturally and that's what makes this album pop -- this collection of tracks are some of his most seamlessly flowing ever. I did think there'd be a bit more folk/acoustic but instead, Dave hangs his hat on more mid-tempo, singalong Americana jams co-written by his brother Tim and honestly, it's one of the best steps forward he's made.

It's not just about Philly as per his last LP, it's a more worldly feel, albeit a personal novel. Take for example, "Saboteurs" which has that "Teenage Wasteland" anthemic ring to it. It's a power-rock jam made for stadiums, made even cooler by the fact I caught it on HBO's corporate media drama Billions. Yeah, that's how big Dave's blowing up. Still, he finds time for intimate, darker chugs like "Civil Lies" which has that Restorations feel to it, as well as soulful melodic drawls such as "Warpaint" -- which rails against male toxicity -- and the catchy "Fireflies" which is brought home so sweetly with the harmonica reminding us what classic, vintage Dave sounds like.

Apart from the stellar production and showmanship of another well-executed technical musical carousel, it's just mind-blowing how much Dave still has that indie essence burning off the pavement. And make no mistake, it takes a lot of balls and talent to juxtapose depression to the album's title, which is the first things his twins did. That duality isn't an easy thing to sing about and Dave pulls it off so well for a complete, wholesome narrative.

By the time the record winds down with tales of suicide on "Bearing Down", you can't help but truly appreciate this slow-burning picky epilogue which feels more like a eulogy than anything else. Robin Williams, Hunter S. Thompson and Frightened Rabbit's Scott Hutchison are paid tribute on this song, which brings the Hause down and reminds us how fragile life really is. Yes, there'll be very dark moments and yes, the onus is on us to make it out, but if someone doesn't, let's still celebrate their lives. But most importantly, be proactive and be there for them. Dave couldn't be more succinct with his message and as you've probably garnered if you'd made it this far through my emotional drivel, Kick is indeed one of the most important records you'll listen to this year.