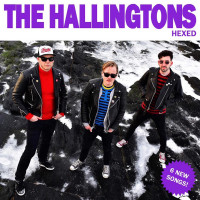 Lately, It seems that there’s been an influx of Ramones-influenced bands and there’s nothing wrong with that. And The Hallingtons, from Norway, aren’t really shy about this. Their new 6-song EP clearly shows that they’re in this for all the right reasons. No gimmicks. No trends. Just three guys that share the songwriting duties and lead vocals who wanna play fun, catchy songs.

The record kicks off with “Jesus Freak”, which starts with a dark, grungy progression that more or less matches the tone of the song. Yet there are plenty of sing-along moments, particularly during the chorus. It is a simple song, yet there are latent profound moments with lyrics like “She asks for forgiveness for listening to a punk rock band.” The second track “Pretty Neat” gives off a nostalgic feel with schoolyard lyrics and kind of a rockabilly sound. Once again, the track is super catchy, partially because background vocals fill in all the gaps. The last song on the Side A is another solid track with harmonized background vox and classic punk rock feel with lines like “please, don’t tell me what to do.”The flip side begins with my favorite song on the record, “Doo-doo Brain”. Once again, it’s a pretty simple song, both musically and lyrically, but that’s what makes it great. Just a fun song with great melody and harmony. “The Witch” and “She’s on Repeat” continue the Ramones worship. Both songs are pretty straight forward in terms of structure and instrumentation, though it could be argued that the last track is a little too simple in regards to lyrics, though I think that’s sort of the point.

The Hallingtons aren’t trying to break any rules with the release of their 3rd EP. And that’s smart. All 6 songs are short, fun, and catchy. The tunes hook you immediately, but never really get boring, despite their basic nature. Fans of the Riverdales, Screeching Weasel, Teenage Bottlerocket, and obviously the Ramones should definitely check this out.

Our Souls: I've Made A Terrible Mistake