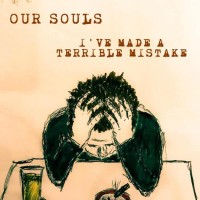 Ok, full transparency: I reviewed the debut EP from Our Souls for this site earlier this year and to put it bluntly, I thought it needed some pretty serious work. I shan’t go over it again (the review is still on here, so go look if you’re curious), but subsequent to my review, the guys got in touch with me. They were totally cool and keen to point out they knew they could do better and that they wanted to prove it. Credit where it’s due, that’s a bold thing to do when you’ve just received a less-than-glowing review, but I was perfectly happy to listen if there was more to come from the band.

So it’s not much of a spoiler to say that this is the follow-up release from the band - a mere 9 months after I Might Drink Myself To Death. 9 months is maybe not a huge amount of time, but it’s a significant period when a young band are finding their sound, and I’ve Made A Terrible Mistake is a decent example of that. If you listened to the 2 EP’s back-to-back then the first thing you’d notice is the production. This EP sounds good. Well-balanced, with so much more bottom-end in it than the last effort which took the DIY sound approach to a level that was hugely to the detriment of the songs. This time around, the production serves the songs well without taking away the frenetic energy of the band. The timing issues that blighted the last EP have also mercifully been addressed.

However, that’s not to say this is going to be your new favourite band just yet. A lot of the pieces are in place at this stage, but truly memorable songs (as opposed to moments/riffs/hooks) are what needs to be focused on now. At various points, you can find yourself identifying direct influences on Our Souls sound - we’re talking bands such as The Vandals, Good Riddance, NOFX or any number of other 90’s SoCal contributors, but those moments tend to be fleeting. What I will say though, is that the band’s songwriting is improving along with the rest of their craft and if they can improve this much in 9 months, then it does beg the question as to what we could realistically expect from the debut album when it does come along.

Look. If you like the gruffer end of the 90’s SoCal punk spectrum, then you should really give a bit of your time to this. It might not necessarily change your world, but you could probably imagine some of the songs (opener “To Wound and Wander, Destitute” being the pick of the bunch for me) appearing on one of the early Punk-a-Rama’s and that’s praise enough for a UK 2019 punk band on their 2nd EP I’d say. Keep at it, guys.

Rational Anthem: It's Only Permanent