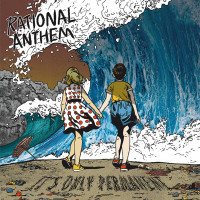 The LP spills open with "Welcome To Paradise City," donning early-Blink-era single guitar twangs and giant choruses, "Photographic Memory" rips into quick double time drums and palm-muted leads that are equally as timeless. There is a charming dinky quality to the mix, allowing the honest pop punk to shine prominently, and the combination of guitarist Chris Hembrough and bassist Noelle Stolp's vocals drive the entire album at a delightful pace.

"Let It Go" drones together with an acoustic track that ultimately forfeits to feedback and a high energy chorus of "woahs," the pep locks right into the heavy hitter in "Unimaginary Girlfriend." "Stay Together For The Chicks" details the band's voyage from Florida to the Midwest, showcasing the group's effortless writing. Their vision of good pop punk is razor sharp, as if they have been locked in a time capsule for the last twenty years, safe from all of the over-polish, bells, whistles, and other contaminations so commonly plaguing the genre today.

"Geography Dysphoria" kicks immediately into hooks and quick half-time, with drummer Pete Stolp continuing to machine through the record. "Alright Already" fades up from a quiet intro and welcoming dynamics before offering perhaps the catchiest tune of the bunch. The excellent songwriting plugs immediately into "Godspeed You! Black Empanada," introducing driving drums, more non-stop lyrics, and some enticing (but healthy) production. "Dragger" shreds into pitted riffs and quick drums, before devolving into another Rational Anthem anthem. The minute-forty-seven banger is crammed with great moments and unique changes.

"Better Get Better" is a terrific nearing-the-end song, taking all of the band's talents to a mid-tempo and placing all of the focus on Hembrough's infectious, acrobatic melodies. It's Only Permanent slams it's doors with the hopeless jam "Through Being Punk," biting their noses to life on the road, and even predicting the band's eventual fate, all celebrated with expert pop punk.

There is absolutely nothing significantly special about National Anthem, which is what props them up in an endangered genre. It's Only Permanent holds no royal flush of gimmicks or producer credits, nor does it taunt guest appearances from better known artists, or attempt to disguise itself from what it is. It is a great record, a great pop punk record from a great pop punk band, and it deserves many purchases and even more listens.

Our Souls: I've Made A Terrible Mistake