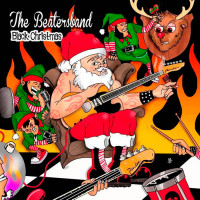 The Beatersband are a relatively new Italian trio that put a punk and garage spin on oldies songs. They’re heavily influenced by both the Ramones and ‘50s rock and roll. The band dropped their debut LP Vol Uno earlier this year and covered classics like “Then He Kissed Me”, “Baby, I Love You”, “Do You Wanna Dance” and “Surfin’ Bird”. Now The Beatersband have followed that up with a holiday EP called Black Christmas.

I know I’ve talked about my feelings about Christmas music before, but please allow me to do it again. For a couple of decades I couldn’t stand to listen to it at all. Sometime in recent years, my stance has softened. I’ve been able to enjoy well done punky Christmas songs, at least in season. (Last year I dug the Christmas 7"s by Clownvis and CJ Ramone.) The September release of Black Christmas is really too early, but I guess I’ll let it slide.

The Beatersband tackle the standards "Frosty the Snowman", "Rudolph the Red Nosed Reindeer" and "Rockin' Around the Christmas Tree". Singer/guitarist Donatella Guida's voice is well suited to the songs, as is the jangly punk and roll music. "Black Christmas" is actually a reworked version of "White Christmas". (For some reason, I was expecting Elvis' "Blue Christmas". Oh well.) The addition of some dark Halloween inspired lyrics and minor chords make it the centerpiece of the brief, four song, nine minute EP.

The Beaterdband do not make music that is particularly adventurous, but they do make music that is fun to listen to. Its greatest strength and weakness is that it's exactly what you would expect. So, that being said, if the holiday mood strikes, Black Christmas is worthy of being added to your rotation.

Rational Anthem: It's Only Permanent

Epic Beard Men: This Was Supposed to Be Fun