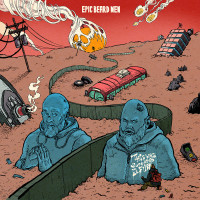 When I was in my senior year of high school, an alumni of my high school named Bernard Dolan (long before he adopted the abbreviated moniker, B. Dolan) started a poetry club in several high schools in the area, including mine. He got those of us in the clubs to start coming to the Providence Poetry slams, where we met a number of amazing artists, including poet and rapper Sage Francis. At the time, Bernard and Sage were not very close and were a long way from building the friendship that would result in Epic Beard Men, but they were each such talented writers that it was a treat to see either one of them perform. Both men turned to focusing on their rap careers rather than slam poetry while I stuck with the slam poetry scene, causing us to part ways and I can’t claim to still really be in touch with either of them, but I’ve continued to follow their music. So in the name of full disclosure I feel the need to point out that I know both men, but I’ve hardly kept in touch with either of them.

Epic Beard Men’s first album, Season 1, just came out last year, and the artists are already back with their second album, This Was Supposed to Be Fun. One thing I’ll credit this project with is making both of these artists more prolific when both of their solo careers have been lagging lately. Sage Francis’s Copper Gone, which marked his return after a four year absence, is now five years old and he has yet to release a follow up. Dolan’s solo discography looks similar, with 2015’s Kill the Wolf being his first album in five years, and it is, itself, four years old now. So the fact that these two artists who have been moving very slowly to put out new material lately have managed to put out two albums in two years is a good sign that the two rappers bring out a lot of creativity in each other.

While Sage Francis usually writes very free form style raps, B. Dolan is known for his storytelling style, which means a lot of these songs are self-contained stories. While that’s more Dolan’s M.O. than Francis’s, Francis still thrives in storytelling formats and the format favors both men equally. “Pistol Dave,” which enlists the assistance of Atmosphere and Blue Raspberry, is an extended character study of a trucker named Dave. The R&B style chorus repeating the name “Dave” with an ironic earnestness brings out a great deal of the song’s latent humor. “Shin Splints” tells the story of Sage Francis and B. Dolan trying to get through the airport for their European Tour and hitting every annoying travel inconvenience possible along the way. The song switches up rhythms a lot to create a really dynamic song that’s still incredibly catchy. “You Can’t Tell Me Shit” is a largely comedic number about people who refuse to listen to opposing arguments. “Hedges,” a chilling and darkly comic song, tells the story of two neighbors with extreme paranoia towards each other who are building increasingly unrealistic fears about each other.

Francis and Dolan are undeniably a great duo in that the two always bring out the best in each other, making each other funnier, more prolific, and more structured than either one is on their own. Season 1 and This Was Supposed to Be Fun are back-to-back blockbusters that both establish this group as the most exciting thing happening in underground hip-hop. There’s so much raw talent between these two that I can’t imagine either of them putting out anything but high quality material. Here’s hoping that these two will continue to bring out the best in each other for many years to come.