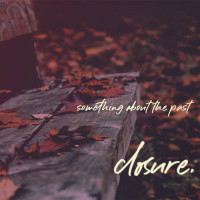 closure. seem like a group of post-Drive Thru era kids who discovered American Football through listening to songs by their favorite pop-punk bands about listening to American Football. They bring an odd sense of youthful exuberance to the rather lonely and dreary sound of late-90’s emo. On their new EP, Something About the Past, the fresh-faced band from upstate New York delivers two tracks full of wet leaves and sad-faced pumpkins, depicting all of those emotions that come with the changing of the seasons in the northeast.

“Oceans” is like the backing track to a reluctant, late-night trek back to your hometown in the fall. The guitars are tuned to that unusual, thumping deepness that helps to carry a soft vocal melody through the opening verse. In a likely ode to their emo heroes, they bridge “Oceans” with horns that, in this case, just seem unnecessary and out of place. The song, like an ocean wave, is calm and settled, then progresses into this surging emotional energy as if hitting the shoreline. The tightness unravels a bit here as the song winds down, but the passionate and nasally vocal outburst, almost like a young Chris Conley, holds everything together to close it out.

In a similar fashion, “Conversations” grows from tenderness through to intensity. The “diddly-doodly” chords are more upfront in this track, slightly throwing off the balance as the song builds. The repeating “whoa’s” and “And I wonder what it’s like to be free” line present a stable foundation to the driving force of the final 30 seconds of the song - the true highlight of Something About the Past. The raucous strumming and tempo changes packed in here really reveal the adolescent pop-punk inspiration, similar to Tiny Moving Parts in how they connect that pop-punk energy with Midwestern emo.

“Oceans” and “Conversations” are both fantastic building blocks for the band. They’re a few songs away from really hitting a stride in achieving their true potential, but the melody and musicianship here on Something About the Past present a belief that they have a bright future, even in all of their gloominess.