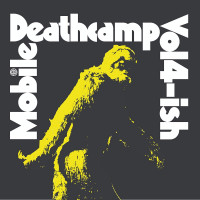 If the band Mobile Deathcamp were a color, they would definitely be black. While I’m sure most heavy bands would hope for that to be the case, this Michigan/Indiana trio wears it on their (presumably black) sleeve. The first sign was the title and cover art of the band’s new EP. Vol 4-ish is an obvious Black Sabbath (and Sasquatch!) reference. Then, the second track is a Black Flag cover. So much black! None more black!

I didn’t know anything about Mobile Deathcamp, beyond having heard their name in passing, prior to Vol 4-ish. It turns out they’re the brainchild of guitarist/vocalist Todd Evans, who’s probably best known for his 2002-2008 stint as Beefcake the Mighty, bassist of GWAR. Musically, it’s not at all what I expected. For some reason I thought they played grim, clunky biker metal. It’s actually a killer combination of speed metal like Kill “Em All era Metallica or early Overkill, and Cro-Mags style hardcore. They just did a run of West Coast shows with Ringworm and Havok, and those bands are a pretty good reference point too.

There is also a refreshing amount of humor on Vol 4-ish. That’s obvious from the first song, “Sour Cremation”, which is also full of rapid fire riffs and breakdowns, and the slightest musical homage to “Sweet Leaf”. “Jealous Again” is a testament to the band’s punk roots. The funny, Midwest-centric “Alchemy of the Black Sun Shark” gives a nod and wink to the 2006 Goatwhore song “Alchemy of the Black Sun Cult”. “Simply Effective” is churning, relentless thrash. Closer “Warheit” is the most metal song on the EP, and wraps things up nicely. My one regret is that I didn’t have a lyric sheet to follow along.

Despite the Black Sabbath references I mentioned earlier, there are no extended stoner jams, and very little bluesy doom. Vol 4-ish is really a collection of raging, two minute thrash songs. It’s something that Mobile Deathcamp seem to have down to a science. This little 10 minute taste has left me wanting to hear more, and isn’t that what a good EP is supposed to do? Check it out, Speed Metal Punx!

The Yoohoos: Up Goes The Rocket