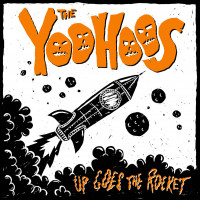 On Up Goes The Rocket, The Yoohoos blast away with all sorts of ecstatic energy. “Planet Heart” charges ahead at a breakneck pace and then suckers you in with a chorus so memorable you’ll swear you’ve heard it before. “Rusty Robot”, with its stop-and-go chorus and semi-sweet/silly lyrics, could be mistaken for the Ghoulies . And later, the bluesy lead guitar and snare work on “Little Alien” could slot in nicely next to “Bring Her Back”, with Eggnog’s vocal turn even sounding a bit like Kepi.

On other songs, The Yoohoos let a more sensitive side shine through. “Up Goes The Rocket” will likely get people singing along with its catchy melodies and almost-tender dynamics. The poignant “Love Disposal Service” has guitar that is nearly ripped from the Gin Blossoms (but better) and some of the best singalong moments on the record. And closer “Cuddle All The Kittens”, a ridiculous song about cuddling the one animal that’ll give me itchy eyes, is still somehow endearing to me. It actually reminds me a bit of an Ultimate Fakebook bite.

Admittedly, a couple of moments keep the record grounded just a bit. Opener “Hello!” plays with a rhythm that reminds me of the Ghoulies intro to “A New England” and introduces each of the band members. But it’s mostly a skippable drag. Later, “Rainy Cloud” is a bit of a buzzkill. It’s got a decent melody and some cool boy/girl vocals, but most of it feels like a slog. And the cover of “Bizarre Love Triangle” is only ok. The boy/girl vocals sound good again, but it doesn’t pull me in like most of the others on here.

On Up Goes The Rocket, The Yoohoos manage to pull off a pretty fun record. Bubblegum songs about space aliens and robots and kittens sometimes hit the spot just right. And for most of Up Goes The Rocket, that’s the case. This is pop punk with a heavy emphasis on the pop side of things. It’s pretty much simple, chiefly infectious, and mostly fun.

The Rifleman: Don't Laugh, This is Serious