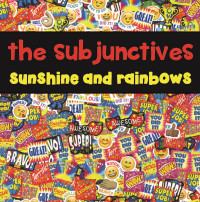 Ean from Seattle pop-punk powerhouses Sicko teams up with Jeff from powerful Seattle pop-punkers Four Lights and Matt to deliver feel-good nostalgic pop-punk as the Subjunctives on their debut LP, Sunshine and Rainbows.

It is clear from the start that the Subjunctives love what they do. They have an infectious fun energy that can be felt throughout the album and will provide you with a mood boost, no matter how you feel going into it. The guitar and bass are bouncy and add to the fun, energetic feel of the album by giving each song a danceable vibe. They work together to keep everything light, showcasing their technical abilities without sounding heavy. They play in the traditional pop-punk style, but it never sounds stale as they always have a different arrangement that keeps each song sounding new and fresh while also maintaining the nostalgic depth inherent to pop-punk.

Each member of the band takes their turn at singing on Sunshine and Rainbows and each song has at least one moment that features everyone singing together in perfect harmony, showcasing the cohesiveness of the Subjunctives. This shifting style shows that the band is free of hierarchy and adds another level of fun and excitement to the record as you never know who is going to be singing the next song. The vocals are all clean, with lots of room for harmonies and clear lyrical delivery, with the lyrics easy to understand and that will stick in your head in the best way. The majority of songs have plenty of chorus action that are easy to remember and sing along with.

The lyrics range from fun tributes to a local venue (“Seattle’s #1 pirate themed punk-rock dive bar” the Kraken on “At the Kraken”) and local scene heroes, the Fastbacks (on “The Fastbacks are the Greatest Band in History, so FUCK YOU”) to feel-good love songs such as “My Girl” to the emotional struggle of staying together with someone on “One More Year”. Sunshine and Rainbows closer “Dumbass” deals with frustration and anger directed a boss with the rallying cry of “I’m working for you/But you don’t own me/Dumbass”. Stick around to the very end of “Dumbass” and after about a minute of silence there is a short acoustic treat that you don’t want to miss. The Subjunctives are able to present a wide variety of topics ranging from traditional pop-punk tropes to their own thoughts, struggles and feelings, creating relatable music that you still want to dance to.

The Subjunctives play with the subgenre and draw on their time in previous bands to create a unique take on traditional pop-punk that yields some very catchy tunes on Sunshine and Rainbows. The album is well-produced and has great sound quality. You don’t have to turn it up overly loud to be able to hear it well and the instruments and vocals sound like they are on an equal playing field. The Subjunctives seem to gel with one another’s styles and present themselves as a united front of pop-punk, keeping the music alive and continuing to expand it in new directions.

The Rifleman: Don't Laugh, This is Serious