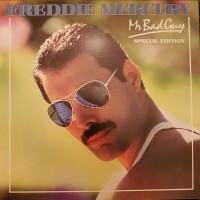 When Queen reissued their catalogue in 1991, somewhat strangely, they commissioned a number of popular producers to “Remix” classic Queen hits as bonus tracks. Seeing the inherent irony of “remixing” one of the best mixed, best recorded, best sounding bands ever, uberproducer Rick Rubin insisted that his remix of “We Will Rock You” be titled as a “bonus remix ruined by Rick Rubin.” Rubin knew what he was talking about 28 years ago, but unfortunately, the Freddie Mercury estate never took notice.

Since then, across the span of several reissues, compilations, and remix albums, the Freddie Mercury estate has remixed and re-re-mixed Mercury’s ‘80s solo material. The first attempt at this was to remix his sole solo album,Mr. Bad Guy into The Freddie Mercury Album and then, shortly thereafter, to remix that into The Great Pretender. (and that doesn’t even address the dozens of dance remixes that have cropped up since then).

The apparent goal of each of these album remixes was to morph the ‘80s pop of Bad Guy into a rock album more akin to Queen classics than Madonna or George Michael dance tracks. The irony of all this is that the original Mr. Bad Guy is an excellent pop album to begin with, and better than most solo albums released by mega-rock band singers. So, that’s why the newly released Mr. Bad Guy: Special Edition is so confounding. Apparently Mercury’s estate feels that that Mr. Bad Guy is somehow lacking, so they decided to hire the “sound team” Justin Shirley-Smith, Joshua J Macrae and Kris Fredriksson to process the master tapes and then “build a new mix true to Freddie’s original versions” using “resources and technology that Freddie may not have originally had available to him in the 1980s.” But… why?

Listen, there’s no shame in the Mercury estate making money of his name. His family and heirs are entitled to that. And there’s certainly no shame in keeping people aware of Mercury’s music- in fact, it’s almost a civic duty. But, what is there to be gained by mildly distorting the original product into a bastard of what it truly is?

The sound team here take the original master tapes and process them into crisp, clear versions. That’s all well and fine. But then, after doing so, instead of maintaining the original integrity of the songs, they proceed to add mild tweaks and changes to the albums which serve no purpose except to make it slightly different than the original release, and in pretty much every case, make it worse and weirder (but not weirder in a good way). Mercury’s original release was a ‘80s style record made in the ‘80s for the pop market. Gone are the complex semi-prog stylings of Queen, now replaced with simple, but catchy synth beats, dramatic ballads, and dance rhythms. Nothing on Bad Guy was especially deep or innovative, but it did show that Freddie could make a pop record with the best of him and his over-the-top personae was particularly suited for a genre that was built on the basis of going over-the-top. Plus, he’s a great singer and has a great way with melody. Which makes it all that much more stranger as to why the new sound team would seek to minimize or twist this curio in the Mercury/Queen catalogue.

The title track, which might be the album’s strongest cut, has the formerly booming brass section, which mimicked a musical to a degree, reduced to muffle whoomps whoomp woomps, cutting the song of all its low end punch. (Why do this?) On the reggae tinged “My Love is Dangerous,” Mercru’s voice is flattened so it sounds like he’s being sampled on his own song. (Why do this?) “Living On My Own” has the original vocal track chopped up with more “ooohs” “aaahhs” and “yeeeahhhs” added in. (Why do this?) Extra echo is dropped on random vocal lines throughout (why do this?)

The changes here never rise beyond confusing and annoying. Nothing here is radically different- just random parts are chopped or pinched. If this was your first time hearing the album, you probably wouldn’t even notice them. If you’re a fan of the minor-classic, hearing this new version is akin to getting a strange, unpleasant taste in your salad. None of the changes here have any real purpose and only distort what was a good to great pop album that wasn’t afraid to be pop. Being that pop unequivocally rules the charts in ’19, you’d think the estate would embrace Freddie’s foresight instead of trying to press what is clearly a commercial release into something else. The original version is just a great pop album. Why mash it up now?

Mr. Bad Guy certainly is due for a nice clean up/remaster- especially since the 12-inch singles released contemporaneously include exclusive songs and interesting extended cuts and alt-versions that were made at the time of the album. In fact, a few years ago, a Russian bootleg company reissued the album without authorization and appended most of the b-sides tracks as bonuses. Why not make an official version of that release with cleaned up sound instead of trying to make the original release something it’s not? If only the producers here took Rubin’s 1991 joke to heart.

The Subjunctives: Sunshine and Rainbows

Saves the Day: Live in Sayerville