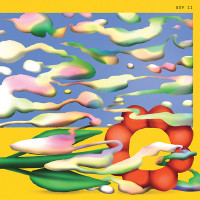 Young Guv is one of Run For Cover's most intriguing acts presently. We know Ben Cook from No Warning and Fucked Up, but here, he switches off his hardcore/punk mode and goes straight to the opposite end of the spectrum: alt-rock, hazy dance jams and a soundscape you'd find middling Best Coast and Beach House. After listening to GUV I, a record I consider one of the most fun, breeziest summer records this year, the follow-up takes a different approach but it's one that's just as rewarding only in intervals. Admittedly, I do feel it'd have been better set as an EP as there's some fat to trim, after all, but overall, not bad again.

Bands like the Beatles pop to mind on "She's A Fantasy", more or less affirming this is going to be a love album. By the time it flows into the REM-esque "Try Not To Hang On So Hard" you can also tell it's a basket case of emotions and yup, a tale about breakup as well. I mean, honestly, this feels like a Netflix rom-come but once you get past the sappiness, Cook's musicianship and surprisingly, the direction back to the dance-pop aesthetic works wonders early on. I did enjoy the more melodic, jangly indie-rock essence of the opening tracks but by the time the shimmery pianos, acoustics and overall dance feel of "Caught Lookin'" hit, you know where the album's going. Or so you think.

Cook nails it in the earliest stages, making it a bit front-loaded. You've got some Beach House and Foster The People as well on "Trying To Decide" -- which is actually reminiscent of the last Somos record. But the buck stops around there, let's say just over halfway through because the rest of tracks don't have the pizzaz as the first half of the record. I mean, I dig the A-Ha and New Order vibe and the overall ode to the '80s on "Song About Feeling Insane" but it just doesn't have the punch of what preceded. Even with "Can I Just Call U", it's like Rooney but, well, lazier. Overall, though, the songs that are well done are remarkably so, to the point they can compensate for the ones that missed the mark. So hopefully Cook strikes a better balance when the third chapter drops because if he streamlines it to the awesome style of the hits off the first two records, it'll be fire.