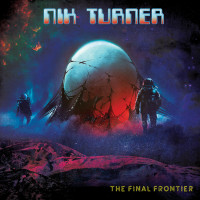 In hindsight, it may have been obvious, but when UK Subs’ Nicky Garratt first linked up with cosmic-weirdo Nik Turner (ex-Hawkwind, but somehow, always the spirit of the band) it was unexpected. What was the first wave punk rocker doing with the the hippiest of all space-rockers? Well, as we all know now, pretty much all the first and second wave punkers were mega-Hawk fans- Jello, Captain Sensible, John Lydon, Rollins, etc etc etc. Their first collab record, 2013’s Space Gypsy was one of the great “what ifs” in punkdom come to life- “what if Nik Turner linked up with a punker and they cut an album of Hawkwind music, but with the speed and power of punk rock?” Of course, the results were excellent.

Since then, Turner being Turner, the eccentric vocalist jumped from project to project. Some were experimental and challenging, ala his collab with Youth, some were whacked out, jam sessions that tested the farthest reaches of avant-rock, such as the Helios Creed connected Chromium Hawk Machine, and some were true jazz odysseys. But, no matter how many times Turner drifts to the outer-scapes of music, he always returns to his core power-space rock (or he brings it with him).

The Final Frontier, which perhaps nods to how 50s and 60s sci-fi media affected Turner, is the third Nik/Nicky collab and interestingly, serves as a polar opposite to Space Gypsy. Space Gypsy found Garratt directing the ship and blasting out 10 focused rock (and sometimes punk rock) rippers while turner, in fine form, issued his cosmic howls over the top. To that end, it seemed to be more punk than interstellar.

By contrast, while Gypsy found Garratt pulling Turner into his field, here, on Frontier, Turner pulls Garratt back to the earliest Hawk days. Sure, there are some riff-heavy crushers here. The lumbering “Thunder Rider” crunches forward with a mammoth intensity that is both spacey and ancient. “Interstellar Aliens” calls back to the first collab as an energetic riff drives the proceedings.

But, more than any Nik/Nicky team-up before, this record lets the band jam. At nearly 80 years old, Turner still loves blasting on the sax and he jumps between classic ‘50s rock bopping and avant-noise clash. Hawk-sociate Simon House is featured prominently throughout, and he meets Turner’s skronking sax with his own violin, which both adds majesty and creepiness to the recordings- he’s equally great at adding majestic backdrop as he is up-front screeching. It’s also nice to see old mate Paul Rudolph of the Pink Fairies/Deviants drop by to drop some guitar lines.

Garratt, for his part, is confident enough to let these maniacs take the reigns, or equally as often, through the reigns to the side and let galactic wind blow the band wherever they may go. He seems to be having a good time jamming and reveling in the dense chaos here. This record is heavy, deep, and murky- much like the first few Hawkwind records. At times, there’s so much going on that you can’t hear everything and that’s kind of the point- a freaky acid trip put to music that will jump out of the shadows here and there before returning or taking you to a far off expanse.

This is where Turner thrives. Even when he was a young man, he had a sort of wizened, all-knowing perspective. His voice still has that trademark ghostliness to it, but around the edges, you can hear the wear of a billion warp-trips. It adds to his cosmic proclamations here making him seem sort of like a trans-temporal Odin or prophet from the edge of time. And more importantly, he’s having fun. Where some other Hawk-spinoff bands have either become self-aware regarding the topic of their music, or have even essentially succumbed to self-parody, Turner seems to be ever-exploring his repertoire and is as engaged here as he was on “Master of the Universe.”

Looking at Turner’s upcoming concert calendar, it looks like he has no intention of slowing down as he approaches his ninth decade. This record proves that he’s as immersed, as genuine, as freaky as he’s ever been. That’s not necessarily a surprise, but it’s nice to know that all these Hawkwind and Hawkwind related records from the past ’50 years meant as much to the central weirdo as they meant to us.