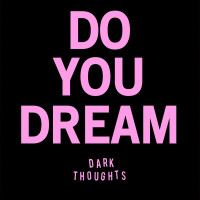 Heralding their anticipated third record, Dark Thought’s “Do You Dream” gives us a two track taste of what’s in store. As always, the band is influenced by the three chord Ramones blast. But, interesting, the A-side here, while it is 78 second stormer, has an almost Replacements style rawness. Singer Jim Shomo still maintains his Joey-ish croon, but there’s a certain hot fire in his voice that we haven’t heard before. That’s not to say that the band is abandoning their mandate, but they’re showing how far this classic structure can move without being distorted.

B-Side “It’s Too Late” finds bassist Amy O and Drummer Daniel Cox really showing off by locking into a simple, but effective groove that shows powerful simplicity beats fancy footwork every time. Like its sister track, it’s another sub two minute racer, but Amy and Daniel place a sunny hop in a track that’s ostensibly negative. “It’s too late” seems to be a negative proclamation, but the rhythm section here make it sounds like a blast.

The band seems to be having a bit of fun here with the A-Side being fundamentally about hope “Do you dream of me like I dream of you?” and the B-side being a pessimistic defeat. Everyone’s known since the start that the Ramones and Ramonescore is highly intelligent musing masquerading as moronic maundering. And that’s not to say that Dark Thoughts is strictly Ramonescore either.- but it’s nice that they’re able to slip in some deft cleverness without making it explicit, for our sake. Just as Jim and company are often on the receiving end of a beating in these songs, none of us are probably as smart as we think we are. But, it’s nice for Dark Thoughts to give us the benefit of the doubt, anyways.

Tsunami Bomb: The Spine that Binds