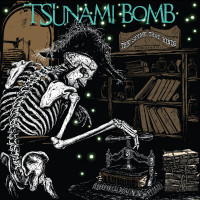 The Spine That Binds might be the darkest sounding victory record of the year. No doubt, the band was facing an uphill battle before even stepping into the studio. First of all, it was their first record in 15 years and it’s no secret that comeback records are always brimming with promise, but rarely deliver upon the same. Second of all, long running vocalist Agent M was no longer in the band, replaced by new singer Kate Jacobi.

But, an uphill battle is just that- a challenge that can be won. Now helmed by Dom Davi and Oobliette Sparks- O.G. members that founded the band and actually played shows before M was the singer- Tsunami Bomb exists in a modified form of the original lineup, with TB-pal-since day one Andy Pohl on guitar and long running member Gabe Lindeman on drums.

So, it’s no surprise to hear Jacobi declare “I’m Not Asking Permission/I Don’t Need Your Forgiveness” and “I’ll live for me” on the aptly titled “Naysayers.” To be fair, the band seems to be barking back at the universe as a whole more than any one person or group of people. But, the track is a sort of black victory call. The band is aware of their challenges and instead of seeking to bury them or minimize them, they take them head.

It’s the right move. Doubly so, it’s the right move because the band succeeds. Spine is built off an energetic backbone. Each track here has “oomph” and rushes forward. Davi’s bass’ is ever-present, giving each of the songs here a low end charge and energy- a sort of muscle and aggressiveness they might not have had before. To add to the menace, Sparks’ keyboards, which have been absent from the band since their earliest releases, make a welcome return. Sparks flips between a TSOL goth aura and a new wave zap. There’s some spookiness here, but between the sprint in the tracks and Sparks’ sometimes-Munsters keyboards, a lot of fun, too.

Jacobi isn’t afraid to put her own personality in the forefront instead of being pushed down by the veterans she’s rubbing elbows with. “Sinkhole” is a standout track which Jacobi using a Return of Saturn Stefani smoothness. Like Gwen, Jacobi has full control and power over her own voice, but not to the extent where we loose realness or tenderness. To the contrary, Jacobi sounds very real here and that’s one of the main reasons the album is so successful. But, that being said, it’s especially nice that just as Jacobi lifts up on “Lullabye for the End of the World,” Sparks comes in with a strictly so-cal snarl and cuts out your legs.

Yet, despite all the fun rollicking, this record covers dark territory. “Lullabye” is about facing death itself and being scared of life. “The Hathors,” which walks the line between Bauhaus and Blondie, howls out at an overly-dense adversary/lover (and also contemplates the machinations of fate). “Dead men can’t catcall” has a funny title, but addresses a very real issue.

Tsunami Bomb could have tried a hard bluff and said, “Ohhh… we’re Tsunami bomb, that classic that you love!” Instead, they doubled down, made the fact that the band is now a combination of super-original members and brand new ones, and cut a record that is heavy, despite its peppy bounce. It was a bold strike, but it was a strike that worked well. But to that end, the band has achieved something great here, so why are the songs themselves often dark and bleak? Maybe it’s because once you;ve been through the blackness, the bright side looks that much brighter. TB and its individual members certainly have been through black periods, which is probably why this record, despite its haunted house keyboards, Bill Ward Bass blasts, rumbling guitar, and songs about knifing catcallers, is downright sunny.

Dark Thoughts: Do You Dream [7-inch]