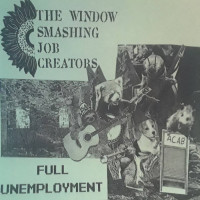 The Window Smashing Job Creators (who by the way have the coolest name ever) came to me by way of recommendation from a good friend, and I’ll admit, I hated them upon first listen. But I was also having a horrible day, and probably would have hated anything that I had heard that day.

A few days later, I started my car, and forgot that I had left them in my CD player. I had no clue what I was listening to when it came on, but I was enthralled. It was full on madness. The instrumentation blew out the speakers of my prius, swirling each of their individual sounds in such a way that had me stunned. It sounded like there 15 of them, or maybe more (turns out only 9), but the melding of all of these beautiful brass and string instruments had taken me to a whole other world.

It’s been a month or two since that day of my conversion, and this has been a review I’ve been trying to write for quite some time, but honestly couldn’t find the right words to explain their sound, their feel, or just them.

It took me having a really bad day to finally sit down and become determined to do just that. And that’s when it hit me. They are determined. In every note, every instrument, every lyric, their sound comes off determined to be the best at what they do. Their sound is a mesh of New Orleans Brass Bands meets Kentucky bluegrass, but more importantly, each individual piece is determined to play its role in the way that it was meant to. Being such a big band, it takes determination to ensure that each player is holding their own, and through this they’ve completed a masterpiece in “Full Unemployment”.

My standard reviews touch on a few of my favorite tracks, and how they play a role in this scene that I’ve been covering for sometime, but that would be unfair to these guys, because I couldn’t pick one, two, three, eight, or 10 songs from the album to highlight, so instead I’ll give you a few of my favorite lyrics:

“I've got that George Soros money, it is the only money for me,

all of that George Soros money bought me all this LSD,”

“whenever we can, if we want to build a better world, then we are going to have to kill the dominant man,”

“even when I am not sleeping I am still dreaming about yesterday,

I am thinking about all of those years when we all had more than enough time to play,”

"The Police Chief is in a Limousine, running from the Guilliotine"

It’s no secret around Punknews, or the internet in general, that I’m a full blown anarchist, constantly switching between ancom and ancap. BUT, one thing is for certain, I appreciate lyrics that question the status quo, and the world at large. I don’t believe we need a government to tell us what to do, how to do it, or anything else for that matter. Not everyone agrees with me, but if you do, I really think you need to check out this band. Even if you don't question these things, check out this band.

Tsunami Bomb: The Spine that Binds