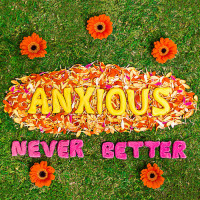 I’m going to take the easy way out on this one. I don’t have the adjectives or clever descriptive copy to characterize Anxious and their style without a direct comparison to another band. It’s just easier for me writing this, and you as the reader who’s digesting it, to put it bluntly, and say that Never Better is Title Fight circa 2011-2013 – plain and simple. The vocal delivery, the guitar tones, the production, everything. It’s not to discredit the band whatsoever, but instead to offer up a highly recommended four-song EP to satisfy those forever missing that Floral Green sound.

Never Better is straight post-hardcore with an adolescent pop flare. The songs are cutthroat and fierce, yet have this sense of innocence behind them. It could be that the band is super young, but the force that's driving these songs is more observant and admirable than action-inducing at first. It’s not to say they don’t flip the internal switch, but this fresh breed of hardcore creates this sense of appreciation, both technically and talent-wise, that takes a few runs through to absorb before getting that urge to start moving.

“Small” kick starts the record with a pounding build-up that ignites whirling riffs and gravelly screams. As much the similarities to Ned Russin on the vocals, there’s just as much to Jeremy Bolm from Touché Amoré and his delivery, adding that melodic layer on top of raspy, emotional howling. The track sees balance with a blend of early-2000’s emo that bridges the wailing, repeating verses. “Please Not Now” is slightly down-tempo and pairs shifty chords with moments of clamor and heavy shrieking.

The second half of the record is where the true Title Fight influence shows. “Seed” trickles out with slow strums reminiscent of “Head in the Ceiling Fan.” It rolls into clean vocals and the most pop-punk the band gets on Never Better. The vocal tone itself is natural and oddly soothing, and holds up the swaying and almost dance-like traits to the track. “Cold” closes things out with a thumping baseline in a very “Secret Society” fashion, supporting an opening verse that proves the band knows a handful of words that rhyme with “cold.” Despite the rather juvenile lyrics, the song rips into a fast and chaotic transition that carries the record to a raucous ending.

Never Better proves that things will only get better for Anxious. With support from a strong label in Triple B Records and close ties to label mates and fellow emerging hardcore youngsters, One Step Closer, they’re set up for a strong future that’s going to start moving quickly.