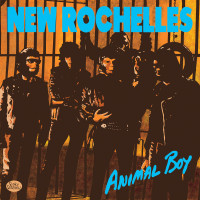 Covering the Ramones has become a right of passage for countless pop punk bands for decades now. Either live or through tribute albums, we have all heard many of our favorites performed by bands influenced by NYC’s favorite sons. During the 90s, a series began of key players in the scene covering the Ramones full-lengths in chronological order. Some were practically carbon copies of the original. Others were more ambitions where the bands took more liberty with paying homage through making the songs their own. Pop punk trio the New Rochelles, also from New York, chose to tackle the 9th Ramones album ANIMAL BOY. On this release, the New Rochelles effectively pay homage in their own brand of Ramonescore pop punk.

Fan favorite “Somebody Put Something In My Drink” opens this lesser known album. Ronnie Rochelle’s harsher vocal style cuts through strong right from the beginning letting the listener know this was not going to be an exact “by the numbers” cover album. The band rips through this opener that features solid gang back up vocals in the chorus. The New Rochelles keep a great pace on “Animal Boy” which features solid bottom end by bassist Rookie. I always felt the tempo was too fast on the original. The Sid and Nancy themed “Love Kills” follows. Drummer Ricky Rochelle handles the vocals on the first of two Dee Dee fronted tracks on this album. Ricky has enough grit in his delivery to set this one apart from others. “Apeman Hop” features the intro sound effects which this track is mostly known for. Ronnie’s knack for clear pronunciation is present on this track, as well as throughout the whole album. This makes many of the lyrics more audible and understandable on the Joey tracks. “She Belongs To Me” is one of the most powerful albums on this release. This is an honest homage to the original. The keyboards are present but not overpowering. The vocals are very clear and carefully delivered to enhance the message of the song. The band seems to have a lot of fun with “Crummy Stuff,” especially with its sing-a-long chorus.

The flipside opens with my favorite track from this album. “My Brain Is Hanging Upside Down” is the definitive 80s Ramones track and I was curious how the band would handle. The sound effects on this were kept to a minimum which allowed the vocals to shine through. Amazing harmonies are present during the chorus which solidified this as one of my favorites on this release. Steady rocker “Mental Hell” follows featuring Rookie’s solid basslines as well as back up harmonies. Drummer Ricky Rochelle’s snotty vocals on “Eat That Rat” would make Dee Dee proud. This version would fit well on any Queers or Angry Samoans album. The short but sweet “Freak of Nature” follows. Ronnie does a fine job emulating the Joey Ramone vocal style and delivery on “Hair of the Dog.” The album closes with a rocking rendition of “Something to Believe In.” Matching backup harmonies combined with synth closes the door on this fun cover album

The New Rochelles have paid a fine tribute to their heroes on this release. Covering a lesser known album has given the band more freedom to make the songs their own. Listening to this album, as well as later ones in the original series, you realize that it’s an impossible task to do the Ramones better than the Ramones! Covers of earlier albums came off more as direct Ramones by number tributes. These later albums offer opportunities to craft more eclectic covers of lesser known tracks. The New Rochelles took the ball and ran with it on this release and will hopefully make you want to revisit the original.