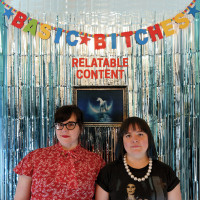 Basic Bitches are a supremely energetic two-piece band that are able to create a great depth of sound without the use of a bassist. They keep the energy up and flowing freely throughout the four-track run time of Relatable Content, showcasing their range both musically and lyrically.

The guitar is powerful and has a wonderfully fuzzy sound while remaining loud and precise for the first half of the album. For the last half, the guitar smoothly transitions from a buzzy, punky dance rhythm on “They Oughta Put Us in Lights” to a lighter, slightly buzzy, playful tone of “Cat at The Party” that perfectly matches the lyrics. The drums are powerful and cymbal-heavy, adding brightness to the songs that adds another level of lightness and depth, keeping the songs moving and adapting to the tone of the lyrics.

The vocals also change with the lyrics, going from an angry, almost spoken word tone on the riot-grrrl influenced “You Know I’m Right” (which deals with the frustration of seeing spineless, under-qualified people (usually men) succeed in the corporate world) and “Real Nice Guy” (told through the perspective of a creepy man trying to hit on a woman in a bar and then the woman’s response) to a feeling of closely guarded vulnerability infused with an urge to dance and celebrate love on “They Oughta Put in Lights” to joyous fun on “Cat at The Party”, a tribute to cats everywhere single-handedly making parties worth going to. Gang vocals are also used, providing harmony and depth while also providing moments to sing along to.

Basic Bitches’ Relatable Content definitely lives up to its name, providing songs to shout along to and dance with in anger and in love. The band will not be hemmed in by the constraints of one genre as they make music about issues and events that they care about, not afraid to break the seriousness with humour and fun. Basic Bitches are definitely a band to watch out for.