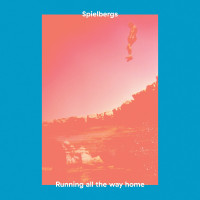 By the Time it Gets Dark

The enduring magic of bands like The Replacements, and the countless fuck-up slacker-poets who swim in their wake, is the ability to draw out a specific kind of triumphant longing. The quick shorthand for this kind of rock music is “it makes me feel like a teenager,” but that’s only kind of it. Sure, you can listen to something like “Left of the Dial,” or “The House that Heaven Built” and feel sixteen again, but the power in those songs isn’t that they invoke adolescence. It’s in the ability to create and recall a kind of “anything is possible, everything matters” response, the kind of thing that gets harder to find as one gets older and hormones slow down.

The Spielbergs have been able to hit that rarified air, albeit momentarily. Their 2019 LP, This Is Not The End, had a lot of curious experiments in post-rock, but it also had “Distant Star,” a classic rock scream-a-long that would have you convinced that the boys are once again back in town. The band builds on that lane with Running All the Way Home, a five-song ep of loser anthems about being alone, together.

What makes this EP a success, and what keeps the band’s full-length from it, is scale. At five songs, a ponderous misstep, like the languid, no-hurry-to-go-anywhere post-rocker “The Sum,” doesn’t thud with the same deafening quality when the other four tracks surrounding it are such soaring anthems. “Fake a Reaction” hits the same kind of vaguely punk alt-rock highs that Gin Blossoms or Goo Goo Dolls regularly swung for in the flannel-shirt-as-belt days of the 90s. “Oh No” dials back the distortion and hits a similar vein, sounding like an edgier, more lovelorn version of The Lemonheads.

These are nice moments, but the reason for the season is the one-two punch of “Running All the Way Home” and “This is Not the End,” two songs that out Beach Slang Beach Slang by a pretty wide margin. The latter is a stomper that would be worth its weight even without its hooky, snare-driven chorus. The former is an ode to fucked-up love and forgiveness, but even if you can’t make out the lyrics (“If you would just come back to me / I’d sweat, running all the way home”) it’s aches with the kind of hyper-present nostalgia that drives the message even without the text.

Speilbergs know their pop playbook, and they execute it for maximum catharsis; the beauty is that, for all the elements you could point to driving toward emotional impact (the double-vocal chorus, the bass-and-drum forward verses, the open-palm guitar at the moments of break) none of it feels manipulative. Put another way, Running All the Way Home really means it’s heart-on-sleeve sloganeering, and it’ll make you mean it, too.