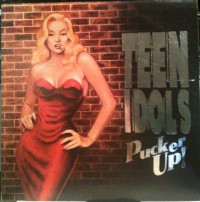 After years of regionalized notoriety, Teen Idols finally burst onto the national scene in 1997 with their self-titled Honest Don’s debut. They introduced this unique version of power-pop that was anchored with the velocity of any skate-punk band of the era, shelling out dance-driven numbers for both pogo-happy introverts and circle pit all-stars alike. Co-produced by Mass Giorgini, it was reflective of Squirtgun’s take on the classic Lookout! pop-punk sound, but almost as if Squirtgun got cornered in an alley by a bunch of jocks and taken for their instruments and leather jackets. It was an explosive and genre-bending coming out party and Teen Idols had a big pair of chucks to fill in any attempt at following it up.

Out of the gate, Pucker Up! gave you the feeling that Teen Idols had even more pep in their step this time around with the 0 to 60 horsepower of its sprightly title track. From there, the record fizzles out; not necessarily in the power, more so in lasting power. What we got was an attempt to capture the same hit-after-hit course of Teen Idols, but were delivered a record that’s shaped together with a few highlights, a bunch of filler and an overkill of backing vocals that made it almost unlistenable at times.

It wasn’t a complete letdown, but the lack of more than just a handful of standouts intercepted the trajectory of where they were headed. They had the look, the charisma and the hit-writing ability to breakout beyond the underground scene, and with Pucker Up!, that’s what you were expecting to happen. It’s almost like they were one American Pie soundtrack song away, or one party scene appearance on The O.C., from mainstream success. “Been So Far” and “20 Below” were the closest to this type of mass-appealing song; ones that had the down-tempo bop and catchiness to slither their way into pop radio. These were the songs you expected, but songs like “Test Tube Teens” and “She’s a Poser” are what their fans wanted more of. “Test Tube Teens” surges with swift lyrical rhythm and a subtle hook that supplements it perfectly, and “She’s a Poser” will bury “Whoaaohhohh she’s a poser” deep in your brain in this not-much-thought-put-into-it blast of a track.

Now, I hate to shed major light on such a minor production element and be so nit-picky, but the backing vocals on Pucker Up! are really what lost me on this record. There’s just SO MUCH, and most of the time they seemed downright lazy and forced. Heather’s harmonies and “whoa’s and ohh’s” were always a unique stylistic advantage of the band, but in many of the songs here, like in “Her Only One,” and “Skinflynt,” they are so prevalent that they water down the tracks completely. Otherwise, Mass’s production was superb in its loud, yet crisp output, bringing this front-loaded sonic element to Pucker Up! and other Teen Idols records that implanted vitality to songs without much lyrical force. To say it was a disappointment might be a bit harsh, but I think most of us just wanted Teen Idols 2.0 and instead we got Pucker Up!

Saves the Day: Through Being Cool (retro review)