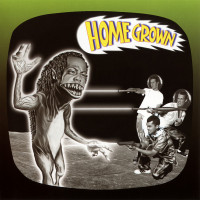 The eleven year lifespan of Orange County's Home Grown concluded in 2005, after the group generated some of the best rounded melodic pop punk of the Drive Thru Records era, so it is natural for fans to forget the defunct band's humorous and satirical beginnings. Enter the group's release of the EP Phone Home EP.

It is difficult to comprehend, but in early 1999, Home Grown matched Blink-182 in both dick jokes and insane, over-the-top drumming, per (former) drummer Bob Herco, who shortly after this release, was forced to leave the group to undergo surgery and rehabilitation for a brain tumor. The later years would also see stages in which bassists and guitarists (respectfully,) Adam Lohrbach and John Tran would abandon joking falsetto and silly lyrics just as Blink would, and commit to more simply-measured, rock inspired percussive backbones.

EP Phone Home did quite the contrary, firing open with a rapid pace cover of Aqua's "Barbie Girl." A ninety second, duel vocal, punk rock interpretation of the discotheque billboard charter. The energy latched onto "This Way," offering Rancid-grade bass leads with mirrored guitar leads, showcasing the methodical chemistry that Lohrbach and Tran both shared in guitar theory. The "oi" packed banger, as with the entire extended play release, overflowed with A bass playing, and opened up to catchy choruses and a clever "five second long" interlude song.

"Sixteen" offered three-part harmonies preaching the heavily-documented history of the underage female demographic regarding the late 90's pop punk genre, and perhaps some insight as to why the band would immediately mature their songwriting into "Giving Up." The lightning-quick ballad riddled with angst and adolescence, featured Home Grown hitting their stride into honesty and presentation. The song complimented by an impossible bass solo by Lohrbach on the second verse, and a chorus of vocals on the bridge and outro. The heavy hit connected by a comical "six second long song" before kicking the album into farewell.

"No Way Out," a rerecording from a compilation release of a NOFX channeled masterpiece about drug use, presented even more nuances and clever hooks from the growing outfit, taking the guitar work and drumming more thoughtfully the second go-around. The result was a pop punk titan, leaving the listener longing for more songs, and soon. Home Grown would go on to perfect their interpretation of the genre in the following year, recording three of their very best songs on a split with Limbeck, titled Connection, and signing with Drive Thru Records shortly after for the immaculate Kings of Pop in 2002, and When It All Comes Down EP in 2004.

Home Grown helped perfect a genre of music that virtually left them high and dry. Their short discography could hold up to any current pop punk band, any day.