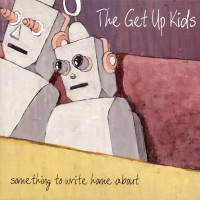 Something to Write Home About (retro review) (1999)

To make a good record is one thing, to make a record that helped define an entire genre, well that’s quite another. In Something to Write Home About, The Get Up Kids did the latter. Coming off the moderate success of their first record, the band signed with then-unknown label Vagrant Records in early 1999, and proceeded to record twelve of the most perfect emo songs of all time.

Whatever the genre of emo means to anyone now can be traced back to this record and the scene it revolved around. The core of Midwestern Emo is roughly defined by emotional lyrics backed by a sort of college/indie rock musicianship, and The Get Up Kids took that sound, and on this record added a pop sensibility coupled with some masterful keyboard parts to create a complete sound. The record took off, selling over 100,000 copies and putting the band and its label at the forefront of a new scene.

The songs themselves represent the best that The Get Up Kids could be. From the energetic and tone-setting opener of “Holiday” to the reflectful and heartfelt “Out of Reach” the band was firing on all cylinders for the full record. Matt Pryor’s distinct, slightly nasally voice sounds great at any pace, and really shines when he has to hit different tempos as on “Red Letter Day.” The Pope brothers provide a killer rhythm section throughout, Jim Suptic compliments greatly on vocals when Pryor steps to the side, and James Dewees’ parts on the keys are simply fantastic.

In short, Something to Write Home About was a perfect record at a perfect time in the genre. Even while being released in the same year as Jimmy Eat World’s Clarity and The Promise Ring’s Very Emergency this release stood out as something special in a scene that felt new and exciting. The immediate impact for the band was an increased touring presence, which included opening for giants like Green Day and Weezer. In the long term, their success here helped the band become a popular draw all the way up to their initial break up in 2005. On top of being a popular album upon its release, this period of The Get Up Kids’ career helped to influence the next wave of pop-punk, and STWHA in particular is credited as impacting bands like Fall Out Boy and Silverstein.

As for the label, Vagrant used the success of this album as a springboard to help define the emo scene at the time. They would go on to put out important records by bands like Saves the Day and Dashboard Confessional, as well as fan favorites by groups like Alkaline Trio and Rocket from the Crypt. Vagrant became synonymous with emo/pop-punk in the early aughts and their Another Year in the Streets compilations showcased some of the best that the genre had to offer.

Something to Write Home About remains a pillar in the genre, and one of the Get Up Kids’ best albums. The sound holds up, and in fact, still feels fresh. Its influence is wide-ranging, but the band has continued to play many songs from this record live, showing their reverence for it as well. Classic is a word that can be thrown around pretty easily, but the truth is that Something to Write Home About is a stone-cold classic.