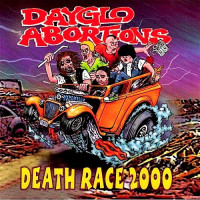 Dayglo Abortions are known for creating humour-soaked, envelope-pushing hardcore punk that demolishes the notion that all Canadians are polite and passive. On Death Race 2000, the band continued with this tradition while also expanding their musical style.

Death Race 2000 had a heavier, more powerful feeling than other albums by Dayglo Abortions. This was probably due in part to the return of original founding member and front man, Cretin, after a few years apart. Back together again they were able to put out a record with incredible sonic depth. With more of a heavy metal influence present throughout the album, the band sounded like a chaotic but cohesive unit who played like the world was going to end and they were going to take their time watching it burn. More intricate riffs were present throughout the album, going beyond the classic three chord structure and adding more diversity and definition to the songs. The bass and drums also made use of more complex patterns that made them sound louder and stronger than ever. The lead vocals were deeper and gravellier and delivered with palpable power and tongue-in-cheek anger. They made frequent use of gang vocals, with everyone adding their voices to choruses or lyrics at least once per song. This drove home the united front of Dayglo Abortions and made you want to shout along with them.

The lyrics poked fun at drug use, drinking, the band themselves, as well as providing some social commentary. The lyrics are offensive and vulgar (the dreaded “c-word” makes more than one appearance – be warned) and are not meant to be taken overly seriously. “Euthanasia Day” is about a government program that puts down the old and sick. It talks about pushing elderly people into the street like garbage bins to be collected. Obviously, this is not condoned or encouraged but with envelope-pushing lyrics it makes you think about the way that we treat our elderly population. While the songs on this album aren’t as controversial as some in the past, they still hold the power to say things that will make people uncomfortable and make them think about why that is.

The return of Cretin to Dayglo Abortions breathed life back into the band and saw them play as a strong, cohesive unit again. The beginnings of a heavier sound on Death Race 2000 stayed true to the band and served as a jumping off point to build towards their even heavier sounding later releases. The songs are energetic and get you thinking about society while offering some laughs with their unique style of humour. The majority of songs aren’t as hard-hitting as those on previous albums, but they showed that Dayglo Abortions were still capable of creating music with some kick. Some of the songs on the album have not held up too well with the constantly changing times but they offer a snapshot of the time in which they were written. Death Race 2000 is a definitely worth a listen because it shows the evolution of the band and sets you up for their newer material while also standing on its own with interesting songs.