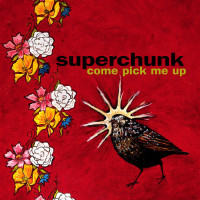 Come Pick Me Up is the second (and by the far best) of “slowed down college-rock era Superchunk” (the others being Indoor Living and Here’s To Shutting Up). Enlisting notorious jazz/noise/folk/whatever musician and former Sonic Youth collaborator Jim O’Rourke on production, Come Pick Me Up stands out as the most lavish and sophisticated piece of Superchunk’s discography.

One listen to lead single “Hello Hawk” will tell you all you need to know. The band’s trademark energy is dialed back to the mid-tempo section, there are tons of strings and horns to perk the verses up, and trademark yelper Mac MacCaughan offers a much more subdued performance this time around. Most Superchunk albums are the kind you can beer up and pogo to – Come Pick Me Up is more akin to sitting down with a glass of wine.

Such a drastic change could be seen as pretentious by many, but I think Superchunk avoids this for two reasons. For one, they’re still extremely talented songwriters. The “ooo-ooo-ooo”s on “Cursed Mirror” never fail to put a smile on my face. Songs like “Good Dreams” and “June Showers” maintain the band’s noisy, snotty attitude, confirming Superchunk haven’t forgotten what kind of band they are. These faster cuts are placed expertly in the track list, to keep things varied without giving the listener whiplash.

The other reason is their direct, heart-on-sleeve lyrics haven’t changed a bit. There are tons of references to nature and wildlife on this album, giving it a sunny, vibrant aesthetic. Par for Superchunk’s course, there are also a couple emotional ballads. “Pink Clouds” melds an awkward attempt at romance with the outdoorsy motifs previously mentioned, which feels extra grandiose with the added horns in the bridge and instrumental outro.

But the real standout ballad is closer “You Can Always Count On Me (In the Worst Way)”. Superchunk is no stranger to bad feelings, but rarely does Mac sound so self-loathing than on this track. The track revolves around feeling like you bring others down, to levels they would have never even experienced without you. These dark themes have more in common with Off With Their Heads than a band like Superchunk. However, it pays off immensely, especially with the lavish production backing it up.

Superchunk in general have always been quite underrated (somewhat by choice), and Come Pick Me Up has suffered the most from that reputation. While it’s not as lavish and complex as something like Arcade Fire’s Funeral, for instance, there’s definitely more than meets the eye here. I’d certainly recommend this to anyone who sees Superchunk as a one-note, noisy pop act. Come Pick Me Up is in my holy trinity of albums from them, the others being Majesty Shredding and Here’s Where The Strings Come In. If you want an album that will warm you up as temperatures begin to drop, this one certainly wouldn’t hurt.

The Aquabats: The Aquabats vs. the Floating Eye of Death! (retro review)