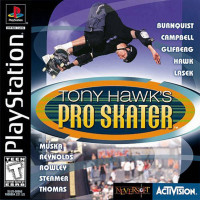 The mid-to-late 90's increasingly accessible Sony Playstation fused compact disc technology to the video game world. The result was, at last, real, actual music to accompany at-home gamers' obsessions. 1999 did just that, and rocketed an introductory punk music compilation into virtually every gaming household on the planet with the release of Tony Hawk's Pro Skater.

The legendary Activision title, developed in close coordination with skating icon Tony Hawk, stuffed abridged punk rock gems throughout it's nine levels, beginning in the opening credit sequence with the Dead Kennedys' banger "Police Truck." The high energy jumper "Vilified" by Evenrude stepped quickly into ska/punk masterpiece "Superman" by SoCal's Goldfinger, who gained perhaps the most popularity from the cameo, as the song was one of the lone tracks in a single-level demo version of the game. (Released as a promotional item from Pizza Hut.)

Primus' "Jerry was a Racecar Driver" would be next, vaulting an 8 year old kick-ass tune to millions of new listeners. It should be noted that this titan spun in consoles over two years before the takeover of P2P file sharing and Napster. Speedealer's "(Screamer) Nothing to Me" or Suicidal Tendencies' (brand new) track "Cyco Vision" would crank on stereos connected to the Playstation's RCA audio cables, so groups of friends could access a pitted collection of (likely unheard) punk expertise as others took their turn at the Warehouse level with Bob Burnquist.

The Suicide Machines' 2 minute anthem "New Girl" was short enough to fit almost entirely into the tiny game, with just a short stitch, allowing it to loop near-seamlessly on "Free Skate Mode." The Ernies' "Here & Now" channeled another realm of punk music, occupied by artists like Zebrahead or 311, but perfectly related the diversity and locked-knit image of skateboarding in the late nineties. Josh Freese original "Euro-Barge" from The Vandals would also hold a timeless place of real estate on the soundtrack, perfectly displaying the band's snide and clever repertoire.

Screamer's "Nothing To Me" and Unsane's "Committed" would round out the tracklisting with the same buzz of energy, but for most gamers it didn't even matter, as they would be holding the controller through at least five or six more rotations of the entire music collection. Activision nailed it, and while future playlists in the series would pump out even more hits, nothing would ever beat the day you knew it was possible to listen to Dead Kennedys, Suicidal, or the Vandals on a video game in your own home. Tony Hawk's Pro Skater changed punk rock music forever.