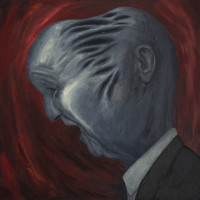 Hamilton, Ontario based The Good Depression are kicking out energetic hardcore jams on No Funeral.

The Good Depression play with passion and inexhaustible energy, creating a presence that can be felt throughout No Funeral. With deep, heavy guitars and bass that transition from heavy, hardcore riffs to melodic solos with smooth chord progression, drums that blend with everything to create a wall of pure sound without being lost and wonderfully shouty, slightly gravelly vocals that also have moments of smooth clarity, The Good Depression blend punk and metal influences to blast through traditional hardcore to create a sound wholly their own. They have layers of sound, with everyone putting their own unique touches on their instrument while still sounding cohesive.

The Good Depression play hard and loud, creating a heavy sound that makes you feel the all of the emotions contained on No Funeral in your body and soul. With weighty lyrical content including, but not limited to, struggles with addiction, betrayal and death, you would expect No Funeral to be a bit of a downer, but it is exactly the opposite. There is a surprisingly positive feel throughout No Funeral, alleviating the weight on your shoulders instead of adding to it. The Good Depression have given catharsis a sound, put this on and shout along or move to it and you will feel ten times better about what is troubling you.

Each song on No Funeral has a different feeling to it, showcasing the creativity of The Good Depression. From a spoken intro that sets the tone for the album before a blast of hardcore sound on “Love Sick” to the frantic, desperate anger of “Delta” to the upbeat, gang vocal heavy “Valley Girls” to “Regards, the Infinite Obscure”.

“Regards, the Infinite Obscure” is a haunting piano-heavy ballad that turns mid-way through to fast, heavy, hardcore. The beginning half of the song features a female vocalist whose voice is clear with great range and gains intensity with the lyrics. The lyrics she sings are extremely visual, bringing to mind images of a lost wanderer and the decent into madness. After she blows the roof off of the place with the powerhouse delivery of her last line, the hardcore sound takes over, replacing the piano and returning to the deep, scream-y voice of the lead singer. With the change in voice, instrumentation and tone, “Regards, the Infinite Obscure” tells two sides of the same story and makes you think.

You can feel the hard work and passion that The Good Depression put into No Funeral. The thought and care that went into the lyrics, arrangements and delivery speak of a band on the rise. The songs are creative and unique, with each one distinct enough to set it apart from the rest. Every element plays of each other to add depth and personality to the album. The vocal delivery is solid throughout but sometimes the lyrics can be a bit hard to make out. The Good Depression have a very solid release with No Funeral, they are establishing their sound and setting themselves up as a name to know.

Restraining Order: This World Is Too Much