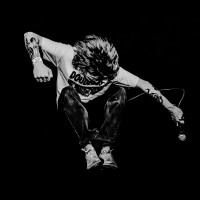 New England hardcore band Restraining Order have released their first full-length, This World is Too Much. The LP is the band’s first for Triple B Records, and offers the listener twelve tracks of kinetic hardcore punk.

The record’s second song, “What Will You Do?,” is a wonderful introduction to the band’s energetic vibe. The song opens with hyper-fast guitars slowed only by the cadences of vocalist Patrick Cozens. The song’s breakdown is a well-written mixture of the austere chunkiness typical in hardcore and the fuzziness of early 80s-era punk. The lyrical content speaks to the band’s youthful vitality, reflecting on the circumstances of people growing into and out of the hardcore underground.

“Don’t Really Think” is very much an homage to the band’s musically geographic roots. There’s some great bass work on this song, helping to bring forward a sound that draws from The Bruisers and Slapshot. There’s a popping grooviness to the song that gives it an aggressive but subtly melodic tone complemented perfectly by the anthematic tempo of Cozens’s vocals.

The ninth track on This World is Too Much, “Something for the Youth,” is a true standout on the LP. There are some great melodic tracks layered in, and the driving rhythm guitars and drum beats make for a catchy hardcore punk anthem. Cozens doesn’t overplay it with his vocals either, offering just a few impactful lines. The song is sure to be a crowd favorite live as it begs for sing-alongs and offers catchy head-popping rhythms.

The title track is the strongest song from Restraining Order on this record. The mid-tempo guitars provide a brooding eerie backdrop to the cynical story-telling offered by Cozens on the song. The high-end melodies in the guitars again add depth by bringing out a gloomy but melodic quality to the track. The song never picks up in tempo, but that’s part of what makes it so memorable. The music is a perfect complement to the existentially contemplative lyrical content.

For hardcore punk purists This World Is Too Much quite simply checks all the boxes. It maintains the ascetic songwriting notable to genre while also offering a youthful energy that the recording does a great job in capturing. There are flashes of very clever writing throughout though, especially in the bass lines and lead guitar tracks. The LP is one of the best releases of the year for hardcore, and a great reminder that there are plenty of true-believers keeping the genre alive and well.

The Good Depression: No Funeral