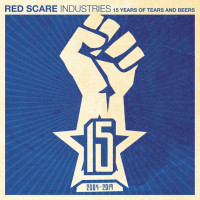 It seems like only yesterday we were celebrating the first decade of Red Scare with Red Scare Industries: 10 Years of Your Dumb Bullshit. Somehow, five more years have passed, and it’s time to recognize another milestone. This time it’s called Red Scare Industries: 15 Years of Tears and Beers. Like its predecessor, it brings together a bunch of unreleased songs from many of the label’s past and present artists.

At 10 years, Red Scare was already one of the bigger and more respected pop punk labels going. At 15 years, they feel like a rare constant in an ever changing scene. The list of bands that the little label from Chicago has helped bring to bring to the world is impressive. The Brokedowns, The Copyrights, Direct Hit, The Lillingtons, The Lippies, Sicko and Teenage Bottlerocket are my personal favorites, but the list goes on and on.

Compilation records are a little tricky to review, as even the great ones rarely have the same continuity as good traditional records. I find the best ones usually have a theme, or at least a narrow focus. This one sort of meets that criteria, in that it celebrates 15 years of what we think of as the “Red Scare sound”. In an attempt to be fair and balanced, I’m going to take the extremely unusual step of breaking Tears and Beers down track by track.

Most of the songs have that good tension that’s created when pop punk is injected with a heavy dose of melancholy. The comrades at Red Scare seem to have a good ear for picking talented songwriters. Ultimately, Red Scare Industries:15 Years of Tears and Beers succeeds at two levels. It celebrates the label’s past while also turning you on to their future.

Restraining Order: This World Is Too Much