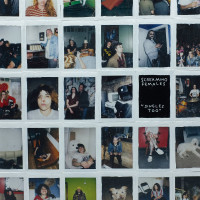 Screaming Females are the best kind of band. They’re the best kind of band because their new compilation, Singles, Too is ostensibly a stray track round-up, but instead of being a junk drawer of tracks, it tears your head off. And to boot, somehow it serves to show the evolution of the band from scrappy college-kid punks to epic rock heavy weight champs (though, they’re still kind of scrappy punks, still).

Starting with their first single, “Arm over Arm” and continuing straight through to their latest, a Hip Hop remix of “End of my Bloodline,” Singles, Too doesn’t give a new perspective of the band as much as it highlights the perspectives that make them so great. “Arm over Arm” sounds exactly like a bunch of sophomores that have a great deal of talent but haven’t quite focused it yet. The song is spiky and white lines all over the place- if the Spits were art students it might sound like this. The band is purposefully messy and that charm gives the track and it’s nearest sisters a chaotic quality that makes the songs as fun for their rampaging riffs and slamming low end as it does for it’s “will they crash or make it to the end” quality.

Yet, instead of driving that ramshackle into the ground, mid-way through, the band focuses their skill, and instead of rampaging like barbwire tumbleweeds, they transform into honed, ronin-strikers. “Ancient Civilization” is where the band makes every slash count, as opposed to slashing a million times at once.” But, even more so, this is where they transform from hopped up rockers to true poets. “Let Me In” has an economic curl that tugs at the hearstrings. The demo of “Hopeless,” which is just Paternoster solo in her house, has a tenderness that speaks to a certain universal feeling, even if the song is about an abstract debate she’s having with her own nervous system. That is, the song is a fairly psychedelic, sci-fi mind warper, but across this acid-chasm, it feels like she’s speaking to some sort of universal truth. The fact that this truth can’t be fully articulated makes it that much even more moving.

And then, there’s “Skeleton.” By this point, Screamales may have gotten more honed, but they were no less savage. Bassist King Mike and Drummer Jarret Douhterty just totally freak out on the back end, recalling an almost two-tone power violence tone. Paternoster screams like a banshee and somehow the band can be threatening and welcoming at once. The album proper concludes with the remix of “End of My Bloodline,” which features emcees Moor Mother and Sammus. Surpringly, the band is able to merge the rap with the rock in a natural groove and it doesn’t sound like a culture clash at all- it sounds like a group of artists doing their thing. It’s a proper way to sum up the band’s progression. Where they were once a trio of wild smash-n-crashers (albeit always with a certain poetic intelligence), now they’ve morphed to far-out freakers- though paradoxically at their freakiest stage, they’re more selective with what they play and evenmore so, with what they don’t play, making their more Spartan material have a gut punch that can knock the wind out of you. Tellingly though, be it at their earliest white hot stage or their newest space-trippers, there are both hugs and sharp teeth waiting at the back end of their strongest material.

The CD includes six covers that the band has recorded across their career, including Neil Young, Sheryl Crow, and Taylor Swift covers- not to mention their mammoth cover of “Because the Night” recorded with Garbage. Each artist here is treated with equal respect. On “Shake It Off,” Paternoster lends her beautiful alto to the refrain which gives the track a sort of soul quality. On “If It Makes You Happy,”Doughterty shows just why he’s the man- some drummers bash-bash-bash away (JD does too, sometimes) but here he lends a fine, gentle touch. Jarrett knows what Charlie Watts knows- when a drummer serves a song instead of serving himself, the drummer actually looks that much better. On the Lover Speaks/Annie Lennox cover of “No More I Love Yous,” King Mike provides a massive backdrop that shows a fine touch as much as it does a fundamental understanding for melody. Therein, he lets the rest of the band perform theatrics. Long live the King.