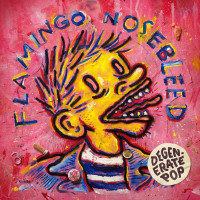 Flamingo Nosebleed has been bringing the punk rock out of Fort Wayne, Indiana for a while now. On their first couple of full lengths, they had an aggressive edge tempered with brief moments of catchy pop goodness. On Degenerate Pop, Flamingo Nosebleed do a full embrace of the pop side and create a batch of songs more memorable than anything they’ve done before.

Degenerate Pop’s pop instincts shine through early and often. Songs like opener “Tune You Out!” and “Radiation Love” have little nuggets that work into your brain (bass lines on “Tune You Out” and lyrical phrasing on “Radiation Love”). The choruses of each have really fun singalong qualities and the verses of “Radiation Love” are an absolute mouthful to try to sing along with, but they are also incredibly memorable. “Hangover Girl” follows suit nicely with another singalong chorus and a relentlessly catchy part around the two minute mark. “Tidal Wave”, perhaps the most arresting song on the record, has a fantastic vocal melody married to a great rhythm section and guitars. “Dazer” and “Perma Vacay” could have the same said about them. A bunch of good-to-great songs. And when they go into a high speed assault, as on “Germz Burnz”, the energy is palpable. It’s a great time, and it burns out in thirty seconds. Kind of perfect.

The only song that doesn’t really land for me is “Revenge”. This one is a bit more aggressive than some of the others (not necessarily a bad thing). But in that aggression, it sort of loses the punk vibe and comes across with a bit more of a rock and roll swagger and groove. It’s not that the song is bad, but ultimately it feels out of place next to the pop punk around it and turns me off a bit as a result. Where most of this other stuff wouldn’t sound out of place next to some Teenage Bottlerocket, “Revenge” fits a bit closer to New Bomb Turks territory. Thankfully, that’s nothing egregious, plus it’s done in a quick minute and a half.

By the time Degenerate Pop closes, you’re likely to have a new record that’ll work its way into your rotation. They’ve got lots of singable hooks, fun song structures, and pop senses that keep things interesting. They’ve also got a thing for aggression and speed and a singer that’s more of a yeller in a way rarely heard on pop punk records. And for what it’s worth, Flamingo Nosebleed are able to bring these differing parts together and make something good out of it. Worth your attention.