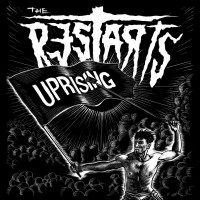 In a lot of ways, The Restarts feel like the British version of The Casualties. (Minus The Casualties’ baggage.) For more than 20 years, they’ve been spreading their fiercely political message through harsh, metallic hardcore punk. I’m most familiar with them from the excellent split LP they did with MDC a decade ago. 2019 sees the release of Uprising, their 6th full length, and first for Pirate’s Press Records.

The Restarts tackle all the hot button topics of the day: climate change, wealth inequality, Brexit, homophobia, problems in the mental health industry, the list goes on and on. Many of the songs were inspired by the band’s humanitarian work. They seem like a sincere bunch who put their money where their mouth is. They also use what I believe to be the first, but certainly not last Greta Thunberg soundbite in a punk song.

Highlights include opener “Panic” (the one featuring Thunberg), “Living a Lie”, “The One Percent”, “Uprising” and closer “New World Order”. The Restarts also know how to break up the fast and heavy songs. “Shut Doors” adds some classic ska flavor early on. “20 Years” does the same thing toward the end. The sonic diversity is a bit reminiscent of the classic D.O.A. records. Parts of Uprising recall vintage Discharge and Subhumans too.

As we hurdle toward the end of 2019, my reviews are getting shorter as I try to squeeze them all in. Don’t interpret that as Uprising not being worthy of more words. The Restarts would make an excellent gift for the hard to buy for anarcho punk on your Christmas list.