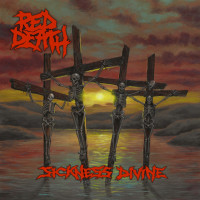 Red Death is a pretty ‘metal band name generator’ name, isn’t it? A colour, and then a word oft-associated with metal. Job done. However, in the case of Red Death, it could scarcely feel more apt. Not because the band or their sound are necessarily ‘typical’ in any real sense, but just in terms of the red-blooded metal that runs through the veins of this record. By which I mean we’ve got a lot of thrash stomp, thudding, rapid-fire bass lines and though even the riffing isn’t always necessarily of the most complex nature, what it certainly is, is chest-thumping and pleasingly, rhythmically metallic in a way not many bands have been since the 80’s. You will often hear the opening riff of a track and it will immediately and tangibly put you in mind of one the big 4, but in a way that feels involving and exciting as opposed to nostalgic. Maybe it’s the fraction of Washington HC influence inherent in Red Death’s sound that means they retain a grittiness and urgency that makes the songs pop so much more than they might do without it.

Although there is a lot of stomp on the record, Red Death still know their way around a turn of pace. In ‘Sword Without a Sheath’ for example, the band alternate between thrash and galloping classic metal/NWOBHM approaches. The latter element most acutely obvious in wild solos, produced with plenty of reverb and a shimmering liveliness that makes them sound otherworldly. You can imagine dragons being slayed to this one, I guess is what I’m saying. Showing more range than some of their peers, ‘Anvil’s Ring’ takes the wild production to another level. It’s an instrumental that you could imagine sound tracking an 80’s cartoon sci-fi movie dream sequence or possibly the end credits of a feature-length fantasy cartoon, again from the 80’s or early 90’s. It really is that neon, sparkly and effervescent. However, the track is a mere 90 seconds and then the band drop right back into their thrashy groove. Vocalist Chad Troncale sits somewhere between Riley from Power Trip (more on that later) and Robb Flynn from Machinehead. Frankly, that’s not a bad place to be for this genre. I’m also happy to say that his delivery is totally convincing and pitches the aggression at just the right level for the musical backdrop.

‘Path of Discipline’ maybe has more Power Trip influence than any other song on display here. It’s hardly surprising that Power Trip do come to mind from time to time as the bands are long-time friends and have toured together as well. The fact that it’s not immediately the best song on the record by virtue of that fact is testament to Red Death’s own sound being if not equally potent, then certainly close; and also something that they’re cultivating in a way that retains their own identity. On which subject, the various moments of picked/arpeggiated intros and interludes are not something that I had expected going into listening to the record and although it was slightly jarring initially (the opening track begins with almost 90 seconds of this), then the more I listen to the record, the more I appreciate their being there. It adds a dimension that on further listening, I would definitely miss if it wasn’t there. The intro to album closer ‘Exhalation of Decay’ even manages to feel doomy, in an early Sabbath fashion.

So having said all of this, my opening comment about the band feeling just like a red-blooded metal band almost seems misleading when considering the myriad influences that have gone into making this record and the band’s sound, but I really urge you to listen to the album to see what I mean, because I stand by it. What Red Death have succeeded in doing is writing a love letter to metal’s adolescent period but infused it with their own influences and the DC HC scene’s grittiness to come up with something concise, varied, but proudly, unashamedly metal in the truest sense of the word. Put those horns up.